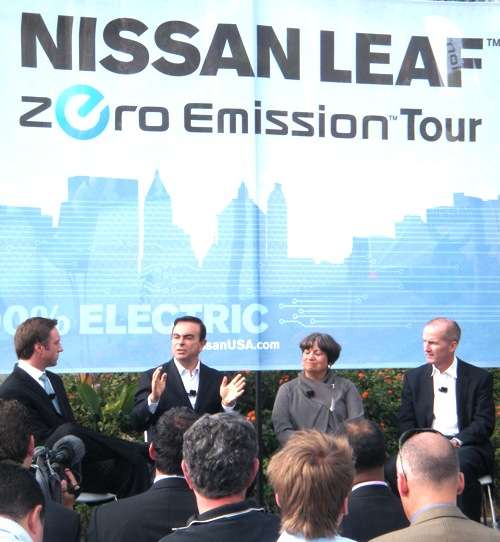 The third year of the first all-electric mass produced Nissan Leaf is set to upgrade a few components and maybe its battery pack. Report hint at a cheaper battery cell.
Advertisement

UPDATED: The battery pack of the new Nissan Leaf will not come from Hitachi, as previously thought. It was a translation mistake from the The Daily Yomiuri.

The story concerns only two models-- the "Altima" and "Pathfinder".

The Nissan Leaf will always have a special part in electric vehicle, EV fan’s hearts. It was, after all the first mass produced and available electric car available to the public. It fared very well all things considered for a first generation car and its 70+mile range finally showed EVs as working alternatives. But as with every first generation, the Leaf had its limitations.

New Battery Pack. According to a new report on the online Japanese newspaper website, the Daily Yomiuri Online reported that the 2013 Nissan Leaf could have new cells supplied by Hitachi, instead of the original ones provided by Automotive Energy Supply Corp. The idea behind this seems simply to reduce cost of the pack. But if you recall, Automotive Energy Supply Corp. was a joint venture started between Nissan and NEC Electronics Corporation a few years back. Hitachi would be a completely new deal and most importantly, the company is completely independent of Nissan.

What about the $1.4 billion funds from the U.S. Department of Energy to build a cell fabrication plant adjacent to the Smyrna plant where the new 2013 Leaf will be built? Nissan is mum on the topic and this news contradicts the original plan to build the battery pack locally. One possibility would be that the US Leaf would have a battery pack built locally near the Smyrna plant, while other global Leaf production would sport the Japanese Hitachi cells.

Another possibility is that Nissan, who has already built its Smyrna, Tennessee, assembly plant where it will build the Leaf, in theory could also build the Hitachi cells. By that same logic, it could also choose to build the Automotive Energy Supply Corp. cells in a strategy to locally build for the global market, such as Ford has adopted with its lines of cars. This would have the alluring incentive to bring down the costs of manufacturing and shipping.

With sales of plug-in hybrids, PHEV and pure electric cars lower than manufacturers' enthusiastic original projections, one thing is certain, we have an oversupply of lithium-ion cells available, which at the very least should somewhat lower their price. Still, will Nissan try to do everything in-house or go for a cheaper alternative, such as using the Hitachi cells for its upcoming 2013 Leaf?

The one upgrade most everyone looks forward to with the 2013 Nissan Leaf is the much-awaited 6.6 kWh onboard charger. One thing is for certain. While cheaper cells spells good news for the overall price of the Nissan Leaf, i.e. it should become cheaper, it doesn’t mean better range, something Nissan and every other car manufacturers are eager to offer.