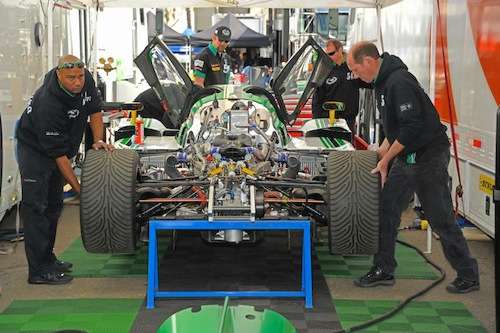 The sun was out on Saturday 14 of April for the Long Beach Grand Prix American Le Mans Series after a rainy soaked Friday. The Prototypes and GTs gave an incredible 2 hour race, a sprint in the Le Mans endurance series.

The Prototype Green Challenge. The favored winners did very well and ended up as expected on the podium. However, there was plenty of tension and nail biting moments within the Green Challenge, as it continues to raise greener racing with teams. The Green Challenge is on, indeed.

LMP X Challenge. Californian Team Muscle Milk Pickett Racing wrote another chapter in the history of prototypes racing this weekend winning both the American Le Mans Series race and the MICHELIN® GREEN X® Challenge at Long Beach for the second consecutive year. The team pulled off the big double, proving that clean and efficient performance can also be exceptionally fast at 1:15.514 and 86 laps in their HPD ARX-03a. “HPD and Honda have proven to be a reliable and fuel efficient combination,” according to winning co-driver Klaus Graf. “We feel very strongly that in long-distance races a big part of the race is to go the furthest, fastest, and use the least amount of energy. Future rules will change in that direction and we are pleased to partner with HPD to have success both in the race and in the Michelin Green X Challenge.”

GTC Michelin Green X Challenge. The Michelin Green X Challenge victory in the GT category was hard earned by the stunning Extreme Speed Motorsports Ferrari 458 Italia team with Scott Sharp and Johannes van Overbeek at the wheel of #01. Starting in ninth position in the GT class, they lead their class in only 35 minutes and eventually finished third in class while claiming the team’s second Michelin Green X Challenge. The race in the GTs was certainly dominated with the Ferraris furiously racing. This team wanted to win and certainly displayed its conviction when Scott Sharp and Johannes van Overbeek constantly duked it out with Tommy Milner and Oliver Gavin, #4 in their GT Corvette C6-ZR1 in epic proportions. The Ferrari finally overtook Milner only to loose its advantage again with brilliant last second braking sessions.

Tidbits And Impressive Acrobatics. Watching these race cars drivers handle these powerful, light and nimble machines is a sight to be seen. Try handling a super sticky 575 hp racing machine when it begins to loose grip… The first impressive spin was Duncan Ende, #25 with his PC Oreca FLM09 at turn 3, right after the quick and windy Fountain fast curb. First minute in the race that started at 4:30pm, Jorg Muller with his #55 BMW GT E92 M3 came into the pits for a lot of body work, followed with Tomy Drissi, #0 PC Oreca FLM09 for a new nose job.

By 4:33 the impressive and lone Lotus Evora-Costworth driven by Bill Sweedler, #23 reported the first engine trouble. That Lotus sounded loud and could be spotted out of the crowd with a normally aspirated Toyota V6 4L pushed out a healthy 430 hp with a throaty roar.

In its fourth year as America’s premier environmental motorsports competition, six of the eight Michelin Green X Challenge winners on the 1.968-mile, 11-turn Long Beach circuit won their respective classes in the race. According to Silvia Mammone, manager motorsports, Michelin North America: “Here on the streets of Long Beach we saw the ALMS manufacturers and teams continue to deliver cleaner, faster, and more efficient performance and bring new technologies closer to the consumers who drive these same streets in their own cars,”. The American Le Mans Series is the only series currently recognized as “Green Racing” by the U. S. Department of Energy, the Environmental Protection Agency and SAE International when the 2010 season-ending Petit Le Mans event at Road Atlanta marked the first time it was recognized as such. The five energies used are: E10 ethanol-blended gasoline, E85R second generation cellulosic ethanol, GTL (natural gas to liquid) biodiesel, E10-electric hybrid power and Iso-butanol gasoline. The MICHELIN GREEN X tires are optimized for fuel economy by reducing rolling resistance and weight without compromising performance. Michelin’s GREEN X Challenge, along with the American Le Mans Series are working to continue raising the level of fuel-efficiency, while reducing CO2 emissions in what it calls clean, efficient and fast racing.