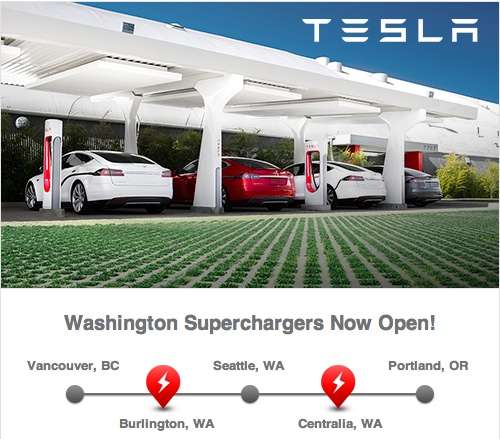 Tesla Superchargers have expanded into new territory as Tesla begins to spread the network beyond the SF-LA and Washington-Boston corridors.
Advertisement

Tesla Motors today expanded the Supercharger network into the corridor between Vancouver, BC, Seattle, WA, and Portland OR. The move begins to form the West Coast skeleton of the network, that allows Tesla Model S owners to drive for free, with as much freedom to take road trips as gasoline car owners have.

The Burlington station is located right off I-5, about half-way between Seattle and Vancouver BC, and will serve useful for linking Model S owners in those cities, Bellingham, and other cities in that vicinity. The address appears to be a major travel center, with a truck stop and small shopping center. The Centralia station is similarly just off I-5, in a shopping area, and is located just south of Tacoma.

That these stations are located next to existing road-side service areas, between major metropolitan areas, is part of Tesla's plan. It makes the Supercharger stations useful for those taking a road trip with a Model S. Having the stations next to existing shopping and eateries makes them that much more convenient to use.

Recently the company opened a few more between the San Francisco and Los Angeles areas, and one near Sacramento. To support a West Coast corridor road trip, Tesla will have to open at least three stations, at a rough guess, between Portland and Sacramento. They've also opened a station in Illinois, between Chicago and St. Louis. Those are in addition to the ones opened last fall between SF and LA (see Tesla Motors revolutionizes the electric car with the Supercharger network), and between Washington DC and Boston (see Tesla Supercharger network construction begins on the East Coast).

The 85 kilowatt-hour Tesla Model S has an electric driving range of 265 miles (EPA certified). At a Supercharger station it can gain 200 miles of range in 30 minutes of charging, when the stations are upgraded to 120 kilowatts, and be fully recharged in about an hour. Contrarily, at a regular 30 amp J1772 level 2 charging station a Model S gains only 10 miles of range per 30 minutes of charging. (see Tesla unveils details of Model S high power and flexible charging system)