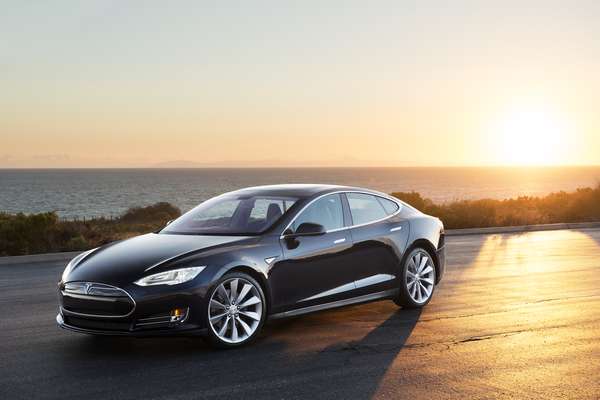 Tesla Motors is continuing its streak of sales growth, selling 5,150 Model S's during Q2 2013 up from 4,900 in Q1 2013. The company announced Q2 2013 financial results today, showing a slight loss for the quarter thanks to a decline in auto sales revenue, a decrease in the cost of those revenues, and an increase in operating costs. Their financial position has never been stronger, sales volume is increasing, and this week they made their first Model S delivery in Europe.

If sales are strong and growing, why did the company have a decline in auto sales revenue? The company's sales volume grew by nearly 200 cars during the quarter, and the production rate also grew from about 400 a week to almost 500 a week. Some of the production increases went into building loaner cars for use in the service centers. The decrease in auto sales revenue was attributed to accounting rules related to sales under the new lease-like financing plan. The accountants say that even though Tesla receives full payment for the cars up-front, the revenue cannot be recognized right away, because some has to be held back in case the customer returns their car early. (see Tesla tweaks Model S financing, giving higher resale value, and lower payments)

The accounting issues are what's behind the big difference between GAAP and non-GAAP revenue.

The delivery of 5,150 cars in Q2 2013 exceeded the expectation of 4,500 deliveries. This is thanks to increasing the production rate to nearly 500 cars per week. The production rate is increasing thanks to Tesla becoming less dumb about how to manufacture cars. During a conference call, Elon Musk quipped that at the end of 2012 they were pretty dumb about building cars, at the end of Q1 they were less dumb, and now they are even less dumb, and they have a ways to go before they're smart about building cars.

The main issue he discussed was the supply chain difficulties, and how it impacted both gross margin (and hence the profit picture) as well as the manufacturing rate. For 90% of the parts going into the Model S their parts suppliers have no problem ramping up parts production, another 5% could ramp up with some difficult, another 4% could ramp up with a lot of difficulty, but 1% of their suppliers simply cannot ramp up production. They cannot sell a car that's 99% complete, of course, meaning their production rate is constrained by that 1% of parts suppliers.

In the past Tesla had problems attracting the attention of the Tier-1 parts suppliers, because it was believed Tesla would crash and burn. Now that Tesla is not crashing, but succeeding in a big way, the Tier-1 parts suppliers are paying attention. It means that Tesla is working to redesign the car, iteratively, to replace hard-to-get parts while preserving every existing feature. The effect is to not only improve the production rate, but to decrease costs.

The company expects to continue growing sales of the Model S, and perhaps see a 40,000 car/year sales rate by the end of 2014, just for the Model S. The reasoning behind that is Model S demand in North America is 20,000 cars/year or more, in Europe the demand should be similar, and the company plans to expand sales to China and Japan by that time, both of which should see significant sales.

In addition, beginning at the end of 2014 the Tesla Model X is slated to begin production. Full scale production of the X won't begin until 2015, but it should mean total production of perhaps 60,000 cars (or more) during the 2015 fiscal year between the Model S and Model X. (see Tesla Model X updated design revealed at 2013 NAIAS in Detroit)

Another impact on the revenue picture was a decline in revenue from selling ZEV Credits. ZEV credits are earned by companies that make zero emissions vehicles, and companies that sell gasoline burning cars need ZEV credits in order to continue selling cars in California and other states. Tesla earns money by selling their ZEV credits to other companies. The revenue fell, as expected, from $68 million in Q1 to $51 million in Q2. Tesla expects these revenues to continue falling.

Tesla expects sales to continue rising in Q3, with over 5,000 units sold. While production in Q3 should increase even more, a number of those cars will be in transit to Europe during the quarter and may not get delivered until Q4. They still expect total sales to be at least 21,000 units.

For the rest of the year Tesla expects to remain non-GAAP profitable, and see positive cash flow. They'll increase capital expenditures that includes spending to increase production capacity. As supply chain bottle-necks are resolved, they'll be able to ramp up production.