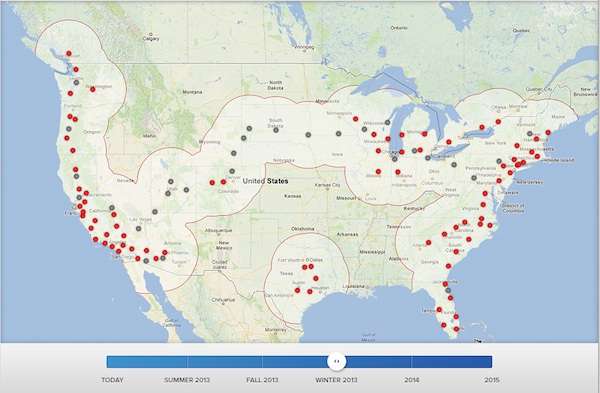 To demonstrate that the Tesla Model S is the first electric car that can credibly take a road trip, Elon Musk is planning to take a family road trip (five sons) in a Model S from Los Angeles to New York City.
Advertisement

Tesla Motors CEO Elon Musk tweeted yesterday a rather mundane factoid, that he has finished planning a family road trip from Los Angeles to New York City. Thousands of people make this kind of trip every day, but what makes it news is that the trip will be taken in an electric car. Think electric cars are only good for around town? Think again!

Musk says he'll drive a Tesla Model S, charging only at Tesla Supercharger stations, and require 6 days for the trip, and only 9 hours of charging time. Read on to see how this will work.

At 1.5 hrs/day, we will only ever need to charge when stopping anyway to eat or sightsee, never just for charging itself

First, the Tesla Model S has an enormous driving range, for an electric car. The 85 kilowatt-hour Model S is EPA rated for 265 miles of driving range. This will mean perhaps 15 charging sessions to make it from Los Angeles to NYC, depending on the route chosen.

In most electric cars a long distance trip would be dominated by charging time. That factoid is behind the critique that electric cars don't work for road trips, because of the typical 3-4 hour charging time. The Model S and the Supercharger system does a complete recharge in under an hour, with the 120 kilowatt version of the Supercharger that Tesla is rolling out. Less than an hour to gain 265 miles of range, versus 3-4 miles to gain 80ish miles of range in a typical electric car. The Model S is a much more credible road trip car, yes?

The last question is "what route will they drive?" Today, the Supercharger network doesn't reach across the US. Eventually the plan is to install Supercharger stations across the US and Europe so that Tesla electric car owners can drive wherever they wish. The earliest moment when a complete chain of Supercharger stations is slated to be available is "Winter 2013". The route goes through Las Vegas, the middle of Utah and Colorado, then through South Dakota, Minneapolis, Chicago, Detroit, and on to New York City. According to the map on Tesla's website, further routes across the US will be deployed during 2014 and 2015.

At the opening of the Tesla Factory Supercharger, Tesla CTO JB Straubel said they would begin installing Supercharger stations at the rate of 2-3 per week.