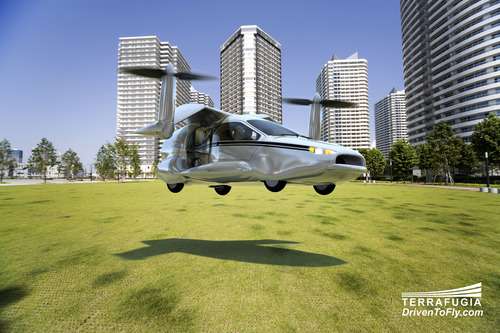 The self driving flying car we were promised as kids could become a reality, thanks to technology being developed by Terrafugia.
Advertisement

As kids weren't we promised flying self-driving cars by now? That idea for years seemed to be one of those techno-fantasies that would never come about, until recently. There is starting to be signs that self-driving cars are a few years away, and now we have news of a flying car designed for anybody to fly (and drive). Terrafugia announced on Monday the design of a flying car that seats four, flies at 200 miles/hr, and is a plug-in hybrid.

The company has, for a couple years, shown videos of one flying car prototype, the Transition car. That car has wings which fold out, can drive around on the road, go to regular gas stations for a fillup, and then over to the local airport to take off for flight. The Transition flying car requires a pilots license to fly.

The vehicle Terrafugia announced this week is a new design, the TF-X. One that incorporates enough automated flying technologies that the company claims it will require only five hours of training for a regular driver to fly it.

It has a vertical take-off and landing design in which, after the wings unfold, the electric motor pods rotate. They point upwards for take-off and landing, and point horizontally for normal flight. The business end of the drive train is a pair of electric motor pods, containing 16 motors per pod, driving the propellers at the end of the wings. The motor system is rated for 600 horsepower per pod, and TF-X has a 300 horsepower gasoline engine used as a generator. The generator keeps the battery pack charged up, and the pack can also be charged by plugging into the grid.

As a vertical take-off and landing aircraft, the runway requirements are small. A clearing of 100 foot diameter is sufficient, or approximately the size of a helicopter pad. The take-off and landing locations must be approved, however, and the TF-X can also use regular airports.

The company says the TF-X won't be ready for another 8-12 years, and all we have today is an artists rendition. One can think of a ream of FAA regulations and airflight safety considerations that must be settled for a vehicle like this, not to mention the usual vehicle design issues. In the meantime the company plans to begin selling the Transition flying car in 2015-16. Purchasers of the Transition will have first dibs on buying a TF-X when it comes to market.