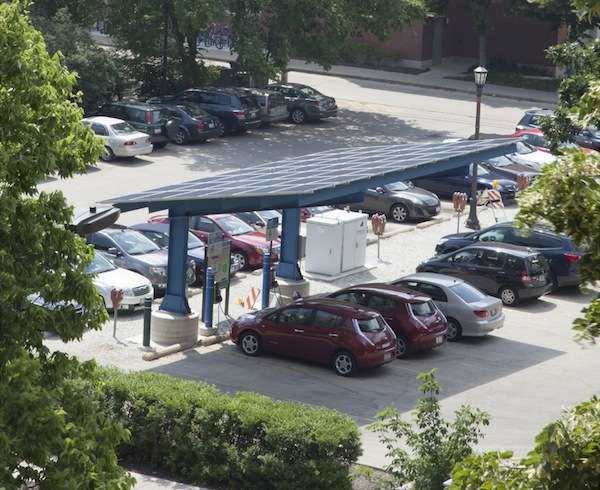 Chicagoland's first solar powered electric car charging station has been completed according to an announcement today from AllCell Technologies and Windfree. The charging station installation is completely powered from an overhead solar canopy, and includes two charging stations.

Development of the project was managed by Windfree, of Evanston IL. The installation includes a 10 kilowatt solar canopy, 40 kilowatt-hour battery system, and two Level II charging stations. The 40 kilowatt-hour grid energy storage battery system directs energy from the solar panels into the battery pack. The system ensures that when a car is is charged the energy comes from the battery pack, rather than directly from the electrical grid.

The battery pack acts as a buffer between the charging station and the grid, ensuring that the electrical grid doesn't see a demand spike as soon as a car is plugged in to charge.

One of the charging stations is used exclusively by car sharing firm I-GO, while the other is available to the public.

“As more and more electric vehicles are sold each year, the strains on the electrical grid will continue to increase,” said AllCell CEO Said Al-Hallaj. “The combination of on-site generation and on-site storage co-located with EV charging stations will be a critical part of ensuring that continued growth in the EV market doesn’t disrupt the normal operation of the electrical grid.”

According to WindFree President Doug Snower, “The combination of advanced battery technology incorporated with our solar canopy EV charging stations make this a dream project for Windfree. We look forward to sharing open source data through a web base monitoring portal that will demonstrate utility infrastructure benefits and energy savings.”