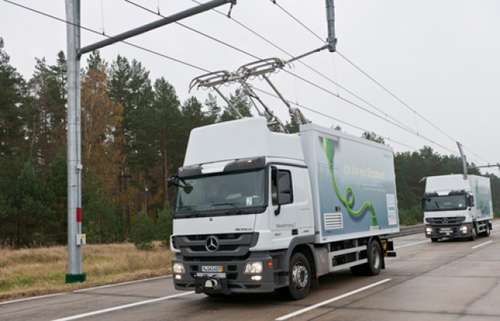 Diesel trucks account for a large portion of the pollution plaguing our cities, and Siemens is testing a system to use components from electric rail systems on those corridors with massive truck populations.
Advertisement

Siemens announced a concept electric big truck design at last weeks EVS26 electric vehicle symposium that is fairly obvious on the surface, but implementation will require coordination between truck manufacturers, governments and trucking companies. The system, which Siemens calls the 'eHighway of the Future', is for trucks to use overhead wiring of the sort used in electric rail systems.

The system discussed at EVS would install on electric or hybrid-electric big trucks the sort of gizmo used in electric rail systems to connect with overhead power lines. Additionally, overhead power lines would be installed along specific highway and road corridors, enabling trucks to be driven using power from the overhead power wires, rather than having to store electricity in an on-board battery pack. Finally, the trucks would have either a diesel engine or battery pack to enable the truck to be driven in places where there are no overhead wires.

The issue being addressed is the chunk of the total pollution inventory created by diesel big trucks. Diesel trucks are responsible for a large chunk of the pollution, and are especially worrisome because of the black soot and particulates thought to be a major culprit in global warming and negative health effects. There are corridors with especially high diesel truck traffic, such as the area between the Port of Los Angeles and two nearby two rail lines. There is a whole flotilla of trucks dedicated to hauling containers between the LA port, and the two rail lines, one is 4 miles away, the other 8-10 miles away, and the area between the port and those two rail yards is horribly polluted.

“When most people think of vehicle emissions, they assume cars do most of the damage, but it’s actually commercial trucks that are largely to blame,” says Daryl Dulaney, CEO, Siemens Infrastructure & Cities, United States. “Freight transportation on U.S. roadways is expected to double by 2050, while global oil resources continue to deplete. And by 2030, carbon dioxide emissions are forecasted to jump 30 percent due to freight transport alone.”

The Siemens 'eHighway of the Future' concept would address this sort of scenario, where a massive number of diesel trucks are traveling the same route day after day.

The Siemens design is a diesel-electric hybrid truck along with built-in gizmos and software required to connect with and draw power from overhead power lines. When the truck detects there are overhead power lines, it extends the gizmo from the top of the truck to connect with and draw power from the lines. Electric rail systems have existed for over a hundred years and prove day after day that electric vehicles can handle massive cargo carrying duties if given sufficient power to do so. Siemens is testing the idea in Germany, and looking at setting up a pilot project in Los Angeles and Long Beach. The company says that while the trucks being tested today are diesel-electric hybrids, the concept is suitable for other combinations including pure electric trucks.

Many companies are already selling electric trucks, for example Balqon, a company founded almost directly in response to truck operations at the Port of Los Angeles. However, electric trucks like those made by Balqon, while immensely impressive, must be very because the battery pack is very large (over 200 kilowatt-hours). Overhead power lines means electric trucks can be given adequate power supplies, while not being required to carry that electricity in an expensive battery pack.

The concept draws on technology Siemens already has on the shelf, developed for electric rail lines. It is simply a matter of deploying this technology on roads, for use by trucks driven on rubber wheels.

Some cities, like San Francisco, already have this sort of system in use with the city bus system. The San Francisco MUNI system has a number of all electric buses with arms that connect with overhead wires, along with the usual complement of light rail lines on dedicated tracks, many diesel or hybrid-electric-diesel buses. The electric buses have essentially the same system Siemens is demonstrating, and are not only cleaner, but quieter than the diesel buses. The SF MUNI system has been in operation for decades.

Tsingshan's Threat to Tesla: EV Maker Is In Battery Crosshairs
Tesla-Funded Research Reveals One of The Biggest Mysteries of EV Battery
END_OF_DOCUMENT_TOKEN_TO_BE_REPLACED