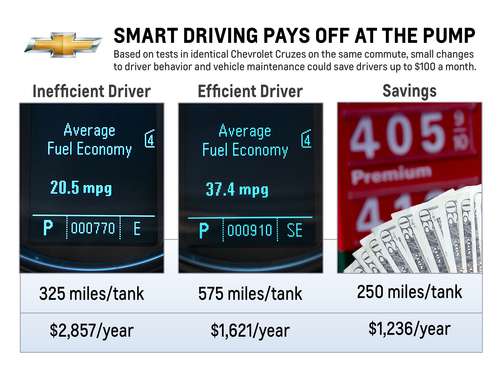 Simple changes to driving habits can have a big impact on fuel economy, saving you money by burning less fuel, and decreasing the negative environmental impact from driving.
Advertisement

It's the start of summer driving season, and along with it will come the annual hike in gasoline prices. GM has helpfully provided some tips to increase fuel efficiency that will not only save money, but decrease the negative environmental effect of driving a gasoline powered car. The best part is that you don't have to geek out on hypermiling techniques, nor do crazy things to your car to improve its aerodynamics.

Two of GM's fuel economy experts, Ann Wenzlick and Beth Nunning drove identical Chevrolet Cruze LTs, but used different driving techniques to demonstrate the improvements you could see with a few simple behavioral changes. The Cruze has an EPA estimated at 24 mpg city and 36 mpg highway. The two drove along identical routes, that included both city and highway driving, a stop for coffee, all in an attempt to mimic a typical morning commute.

Ann Wenzlick drove using efficient driving habits, and achieved 37 miles/gallon efficiency. Beth Nunning, on the other hand, drove with a lead foot and did other inefficient things, achieving a paltry 21 miles/gallon efficiency. The difference between 37mpg and 21mpg, on the same car, is enormous, a full 40 percent difference in results. Where Wenzlick would get 575 miles of driving per tank of fuel, Nunning would get only 325 miles.

The fuel efficiency differences spread out over a year of driving would mean that Wenzlick would spend $1,621 per year on gasoline, while Nunning would spend $2,857 per year. By driving inefficiently Nunning's habits are costing her $1,236 per year in excess fuel purchases. GM's figures don't show this, but it also means her personal environmental impact is that much worse than Wenzlicks.

“Ann and Beth’s results support data from OnStar that shows the fuel economy of drivers in identical cars can vary by 75 percent,” said Roger Clark, manager of the GM Energy Center. “With a well-maintained car, the best drivers get up to 25 percent more miles per gallon than average. When you combine a poorly maintained car with inefficient driving habits, the fuel economy of the worst drivers can be 50 percent below average. The fuel economy of every vehicle is greatly affected by how you drive, and how you care for your vehicle. Often, relatively small changes to your driving habits and vehicle maintenance can make the difference between being on the bottom, or the top, of the fuel-economy scale.”

Wenzlick and Nunning provided some tips

Take it easy: Wenzlick accelerated smootly, while Nunning made jack-rabbit starts and otherwise drove with a lead foot. Her aggressive driving style is what resulted in the lower fuel efficiency rating. There are more hypermiling techniques along these lines, such as if you see a light turning red ahead of you, take your foot off the gas and coast to the light, rather than keeping the accelerator going and braking at the last minute.

Driving 70, not 80: This is a simple matter of physics, accelerating to the higher speed takes more energy, and will consume more gasoline or electricity, depending on the fuel in your vehicle. Additionally, driving at 80 causes more wind resistance than driving at 70, requiring more energy, and more fuel. Tell your inner Sammy Hagar to grow up.

Use cruise control: Maintaining a constant speed is more fuel efficient than slowing and speeding.

Roll up the windows: This cuts wind resistance and increases aerodynamics. It may be fun to drive with the windows open or top down, but it increases the energy (and fuel) required to operate the vehicle. It may mean having to turn on the AC depending on the weather.

Using roof ornaments: Those doodads advertising your support for your favorite baseball team, or the ski rack on the roof, those increase wind drag, decrease aerodynamics, and generally cause more fuel consumption.

Carrying extra junk in the trunk: The more weight the vehicle is carrying, the more energy required to get it moving, this again is straight out of physics class.

Ignoring the “check engine” light: How many of you run to the repair shop when the check engine light goes on? Maybe your car is electric, doesn't have an engine, but has some other problem indicator. That indicator could well be a problem that needs to be addressed, which might impact fuel efficiency.

Not bundling errands: What they mean, is if you spread your errands out, running one a day, this is less efficient than doing them all in one go. The point here is that a warmed up engine is more efficient than one that's starting from cold. If you stop in several stores, spending 15 minutes in each, the engine should still be warm after each one, and maintain higher efficiency. Instead if you do one store a day, you're not able to exploit any efficiency gains.

These tips are relatively simple, which anybody could accomplish. There is a whole field of fuel efficiency tips one can find by looking at ideas published by the hyper-miling movement. For example one hyper-miling technique was to turn off the engine at long stop lights, restarting it just before the light turns green. This is an innate ability of hybrid cars, and nowadays there is auto-start-stop technology being added to cars. If you don't want to geek out to the ultimate in hyper-miling, the tips above should still be enough to save on fuel.