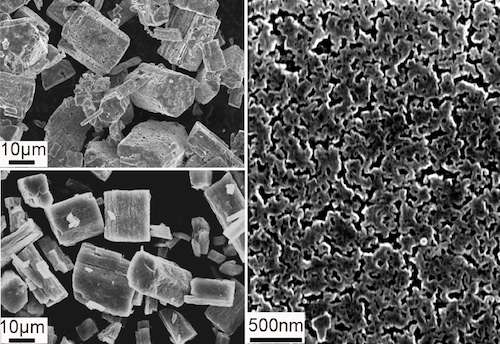 A promising development by researchers at the Oak Ridge National Laboratory (ORNL) is expected to enable safer batteries with higher energy density, giving electric cars a longer driving range, due to a switch from liquid to solid electrolytes.
Advertisement

On Wednesday, researchers at Oak Ridge National Laboratory (ORNL) announced they had developed the first high-performance, nanostructured solid electrolyte for more energy-dense lithium ion batteries. This is different from todays lithium-ion batteries, which use a liquid electrolyte, by using a solid instead. In a battery, the electrolyte is the material that conducts ions between the cathode and anode.

Liquid electrolytes can have safety issues because of flammability, depending on the battery chemistry. The chemistries used in electric car batteries are regarded as safe. However the ORNL researchers claim that building batteries using a solid electrolyte can not only overcome safety concerns, but increase energy density. Increased energy density means an electric car with a longer driving range, or else a less expensive electric car with the same driving range.

"To make a safer, lightweight battery, we need the design at the beginning to have safety in mind," said ORNL's Chengdu Liang, who led the newly published study in the Journal of the American Chemical Society. "We started with a conventional material that is highly stable in a battery system - in particular one that is compatible with a lithium metal anode."

The solid electrolyte is made by manipulating lithium thiophosphate to conduct ions 1,000 times faster than its natural form. A nanostructuring process alters the structure of the crystals that make up the material. "Think about it in terms of a big crystal of quartz vs. very fine beach sand," said coauthor Adam Rondinone. "You can have the same total volume of material, but it's broken up into very small particles that are packed together. It's made of the same atoms in roughly the same proportions, but at the nanoscale the structure is different. And now this solid material conducts lithium ions at a much greater rate than the original large crystal."

They are currently testing the system at small scale in the laboratory, and have a patent pending on the invention. "We use a room-temperature, solution-based reaction that we believe can be easily scaled up," Rondinone said. "It's an energy-efficient way to make large amounts of this material."

The work is clearly not ready for commercialization, a step which will rely on ORNL finding a commercial partnership with a company who will develop the technology into a product.