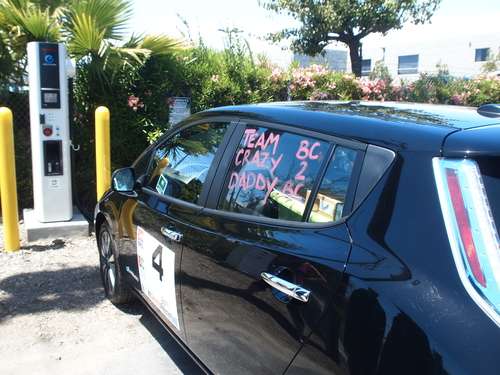 Looking to increase the Nissan Leaf's attractiveness, Nissan is expanding the network of dealer-based fast charging stations to include 100 such stations in 21 markets by 2014.
Advertisement

Back in January, Nissan announced a plan to build a nationwide network of CHADEMO fast charging stations at Nissan dealerships. On Monday, the company reiterated their commitment to the program, saying they were ready to go from a 24-dealer pilot program to a larger deployment of 100 CHADEMO stations nationwide in 21 key markets.

The 24-dealer pilot program was rolled out at dealerships in the markets of San Francisco, Los Angeles, San Diego, Sacramento and Seattle. It allowed Nissan to study the frequency of use for the chargers and the impact that charging has on the dealer's operations.

Nissan of Downtown Los Angeles is averaging about 10 charging sessions per day at its quick charger. Their general manager, Richard Luengo, said "We are located at the intersection of two of the country's busiest freeways, so having a quick charger available for the thousands of commuters who drive by us every day is a boon for business. There is a steady stream of folks using the charger, and we've generated significant good will in the LEAF community. Over the past four months, our dealership has seen a marked improvement in sales, and some of that is clearly attributable to the new quick charger."

Since the pilot began, about 5,600 charging sessions have taken place, with each location averaging about 4.5 sessions per day.

Installation of new chargers will begin in east coast markets, starting this summer. Nissan is working with Aerovironment to supply the charging stations, as well as installation services.

When the program was first announced in January, the goal was to build out 500 fast charging stations by 2014.