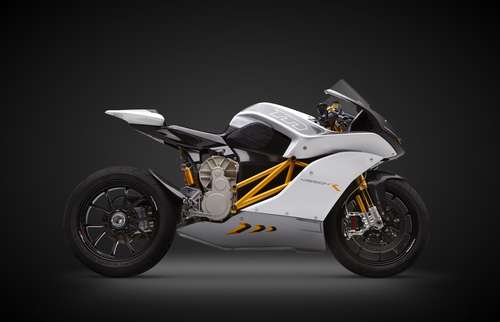 Implementing the promise begun by Mission Motors, Mission Motorcycles has unveiled an electric motorcycle with performance firmly in the superbike range.
Advertisement

The high end electric motorcycle market now has some competition thanks to a pair of bikes unveiled by Mission Motorcycles on Monday. While there are several companies selling electric motorcycles, until now only one company has been selling bikes that come anywhere close to proper superbike performance levels. The Mission R and Mission RS, derived from the Mission R prototype built by Mission Motors, offer performance firmly in that ballpark.

At the 2011 TTXGP/e-Power race during the MotoGP weekend at Laguna Seca, the 2011 Mission R prototype (with Steve Rapp riding) set a lap speed record that not only matched the 600cc superbikes racing that weekend, but still stands today 2 years later. Rapp not only won that race, but smashed the closest competition by finishing a full 40 seconds ahead of the MotoCzysz entry. Mission Motorcycles based the Mission R and Mission RS design on that prototype bike built by Mission Motors.

The first step is the Mission R and Mission RS electric superbikes. Most of the technology is the same on each, with the RS adding a MotoGP class suspension system to make a race-ready package.

The Mission R has a 160 horsepower (120 kilowatt) liquid cooled AC motor, that delivers 120 ft-lb of torque. The James Parker designed frame uses a tubular frame made of Aluminum and Chrome-moly, and incorporates both the battery pack and motor casing as stressed members of the frame. It uses Ohlins shocks and suspension all around, Marchesini wheels, Dunlop tires, Brembo brakes. The RS uses race-ready versions of these components.

Both bikes use the MissionOS user interface. It's a cellular-data enabled touch sensitive screen with integrated GPS, bluetooth, an image stabilized HD camera, turn-by-turn navigation, and other options for use on the track including access to a telemetry data feed.

The only competition for the Mission RS is the Lightning Motorcycles electric superbike. That bike is in limited production, and has also given performances in the same ballpark as the Mission Motorcycles bikes. The 2011 Mission R did beat the 2011 Lightning by 40ish seconds, but the 2012 Lightning nearly broke the lap speed record Mission set in 2011. These two, Mission and Lightning, are the only ones in production with bikes at this performance level. While the Brammo Empulse RR and MotoCzysz E1pc both perform at a level similar to the Mission R and RS, neither are in production.