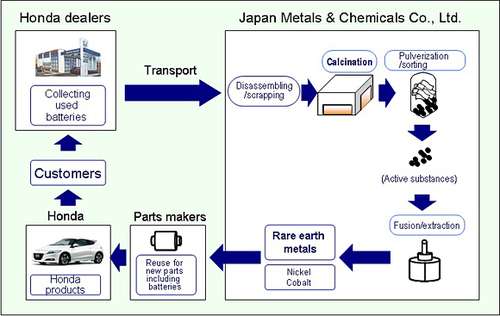 Honda and Japan Metals & Chemicals have developed rare earth metals recycling technology which could mitigate the rare earth metals supply issues which casts a shadow over the potential these metals have in hybrid and electric cars.
Advertisement

What Honda and Japan Metals & Chemicals announced is the worlds first mass-production recycling process to extract rare earth metals from used Honda parts. Honda stresses this is not an experimental process, but a mass-production process. The initial goal is to extract rare earth metals from used Nickel-Metal Hydride batteries, the sort which are used in hybrid cars. The companies had been recycling these batteries with a heat treatment that produced a lower grade material. The new process, according to the companies, produces materials with high purity, and extracts 80% or more of the rare earth metals used in nickel-metal hydride batteries.

The rare earth metals extracted from old batteries can then be used to make more batteries. Honda plans to expand use of the process to other components in Honda's product line.

The picture provided by Honda shows batteries being collected by Honda dealerships, but presumably they could also be collected from scrapyards. The used batteries are trucked to a recycling plant operated by Japan Metals & Chemicals, put through various processes, the result of which is Nickel-Cobalt and various rare earth metals.

If there is no recycling ever of rare earth metals, eventually the mines will run dry and we'll no longer be able to enjoy all the benefits these materials bring us. These benefits are not only the components in electric cars, but nearly every kind of electrical gizmo contains rare earth metals. The plan Honda has announced is only one step in what must be the development of a whole range of technologies and businesses to divert used gizmos from the landfill waste stream, take them to recycling factories and extract the valuable materials.

Toyota vs Tesla: Which Stock To Buy These Days
For Some Former Daimler Managers Daimler Is Authority, While Tesla Is Like a Startup
END_OF_DOCUMENT_TOKEN_TO_BE_REPLACED