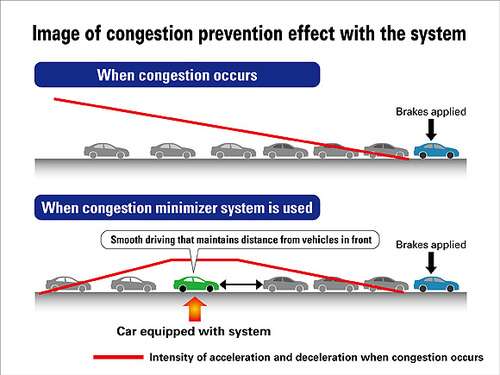 Traffic congestion slows down travel, sapping at economic activity and our lives, costing us travel time, increases the likelihood of accidents, and forces a higher level of air pollution than necessary. Honda Motor Company recently announced development of what the company calls the "worlds first technology to detect the potential for traffic congestion and determine whether the driving pattern of the vehicle is likely to create traffic jams." This offers the potential to reduce traffic congestion, and is an early sign of fully automated cars of the future.

The key to this technology, according to Honda, is recognition that the acceleration/deceleration of one vehicle affects other nearby drivers, and can lead to traffic congestion.

Honda's research was in collaboration with the Research Center for Advanced Science and Technology at the University of Tokyo, focusing on developing an experimental system to detect potential traffic congestion. Test results demonstrate the system could increase average speed by approximately 23% and improve fuel efficiency by approximately 8% of trailing vehicles.

The next step towards bringing this technology to market in vehicles we could buy, Honda will be conducting field trials in Indonesia and Italy in May and July, 2012.

The system does not depend on collecting traffic information from road sensors calculating which sections of road are congested. Instead it relies on watching the acceleration and deceleration patterns of the vehicle. Cars being driven on the road are in a mesh of relationships between each neighboring car. When one driver slams on their brakes, the following cars either react in time (slamming their brakes too) or crash into each other. This means one drivers driving pattern can create traffic congestion, because of the effect on other drivers.

Honda's system provides drivers with "appropriate information" which includes a "color-coded display" on the dashboard that encourages smooth driving. This in turn should reduce rapid acceleration and deceleration, reducing the reactions by other car drivers.

Honda does envision connecting on-board computers using wireless data connections to "cloud computing servers" to generate data exchanges, about driving patterns, between cars. This would enable on-board computers to use automatically triggered adaptive cruise control to automatically adjust vehicle speed. This way a line of cars driving on the highway could stay in synchronization with each other, maintain a stable separation between cars, and a more consistent speed on the road. Adaptive cruise control monitors vehicle speed and, using a millimeter-wave radar system, scans the road for other vehicles. Using this data, ACC can help the driver maintain desired speed and safe distance from other cars.

One of the dangers of traffic congestion comes when drivers do not maintain safe following distance. This is the root cause of chain reaction collisions when one car driver slams on the brakes to avoid a problem, and the following cars are too close to allow the human driver to react in time to avoid a collision.

This is another instance of an automobile manufacturer researching a system to automate car driving. While the research is not a full automation system, it is a step towards having on-board computers take over some or all of the responsibility for safe driving. The theory is that computers can react more quickly than can humans, and that it is human inability to react to road conditions that is a cause of some traffic accidents. Additionally maintaining a smoother flow of traffic has been shown to reduce fuel consumption across the board.

Perhaps this is a stepping stone towards the RoboCar vision we discussed a couple months ago. That vision predicts fully autonomous cars that could radically change the patterns of driving on roads and highways, resulting in safer roads and greater fuel efficiency.

Tesla Giga Berlin's New Hurdle: It's Not Only the Gov't, but Now Tesla Itself
Teslas Are Sold Out Until 2023, But The Timing May Reverse
END_OF_DOCUMENT_TOKEN_TO_BE_REPLACED