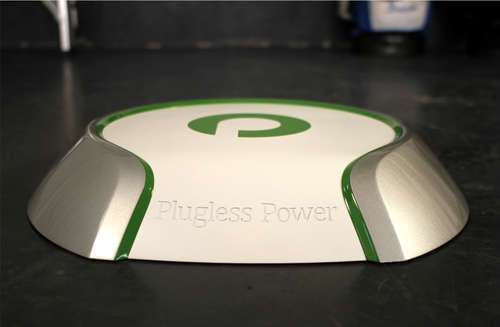 Wireless electric car charging is expected to simplify electric car ownership, and a research project between the ORNL and Evatran aims to test wireless charging over the next three years.
Advertisement

Wirelessly charging electric cars could take a big step forward thanks to a project between Evatran and the Oak Ridge National Lab (ORNL). Evatran announced on Monday having been awarded a subcontract under ORNL’s DOE Project, “Wireless Power Transfer (WPT) and Charging of Plug-In Electric Vehicles.” The project covers integration of high powered wireless charging into electric car models that are currently on the market.

Evatran, a sub-contractor to ORNL's project, has been developing wireless electric car technology for several years. Their implementation has a unit on the ground which acts as a power transmitter, and another unit mounted in the car to receive electricity. Charging an electric car is as simple as parking the car over the top of the transmitter pad.

“This is our area of expertise,” commented Rebecca Hough, Evatran CEO and co-founder. “We’ve spent the last three years focusing on how to efficiently and safely integrate wireless charging systems into electric vehicles. The information and learnings gathered from our field trials will be extremely valuable in helping ORNL to create an efficient, low cost production design. We couldn’t be more excited to work with such strong industry leaders on this initiative to bring wireless charging into the mainstream.”

That the 10 kilowatt charging rate is targeted by the project is a strong hint that Tesla Motors is involved as one of the companies.

With wireless charging technology, electricity is sent into an electric car without requiring a physical plug-based connection between the car and the charging station. Generally wireless power transfer uses a pair of inductive loops over a short distance between transmitter and receiver. Similar technology is available for charging portable electronics devices, and to charge an electric car the power levels are much higher (of course).

Evatran's Plugless Power system is available today and can be integrated with Nissan Leaf's or Chevy Volts as an aftermarket item. The company is also working with automotive manufacturers to integrate the Plugless Power technology into mass-market EVs for launch by 2015.