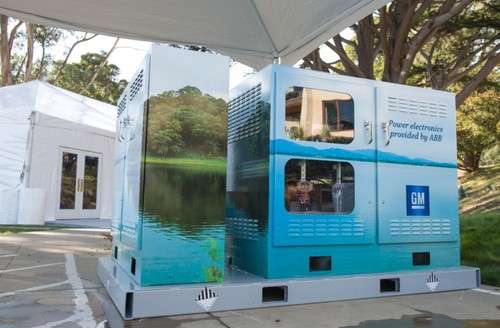 What happens to electric car battery packs after they've seen a useful life in an electric car? That's one of the multi-billion-dollar questions about the future of electric cars. On Wednesday in San Francisco, GM and ABB demonstrated what the companies called "the next stage in battery reuse" repackaging five used battery packs from Chevy Volts as an energy storage unit.

Energy storage systems are a part of the "Smart Grid" vision, and are seen as playing a vital role in stabilizing the electrical grid as well as providing a way to store electricity from intermittent sources like Wind or Solar power, allowing renewable energy sources to play a bigger role on the grid. One form of grid energy storage systems are battery packs much bigger than the ones used in electric cars.

An electric car battery pack can be retired from its electric car while still being able to store and release electricity. Say the pack has degraded to where it can only store enough electricity to drive its car 40 miles when it had previously had 80 miles driving range, that battery pack can still store a respectable amount of energy. This ability conceivably has value, providing a "second life" for these battery packs by repurposing them as grid energy storage units.

The unit shown by GM and ABB had five used Chevrolet Volt batteries repackaged as a modular unit capable of providing two hours of electricity needed by three to five average American homes. Specifically that means 50 kilowatt-hours of energy storage, and during a demonstration event the unit provided 25 kilowatts of power to run the support lighting and audiovisual equipment in an “off-grid” structure used for the demo event. The demonstration unit used ABB’s Energy Storage Inverter system and it's claimed a similar system could be used to power a group of homes or small commercial buildings during a power outage or to gather electricity when it's inexpensive (at night) and release it during the day when the electricity is more expensive. This application is referred to as community energy storage to distinguish it from substation-size energy storage projects.

“GM’s battery development extends throughout the entire life of the battery, including secondary use,” said Pablo Valencia, GM senior manager of battery lifecycle management. "In many cases, when an EV battery has reached the end of its life in an automotive application, only 30 percent or less of its life has been used. This leaves a tremendous amount of life that can be applied to other applications like powering a structure before the battery is recycled.”

“We showed today how fast this research concept is turning into reality,” said Allen Burchett, ABB’s senior vice president for Business Development in North America. “The ABB-GM Volt battery system is the world’s first use of car batteries as possible back-up power for homes and other commercial uses. We will be installing it on the grid soon to complete the technical evaluation, and this will tell us all what smart grid applications are possible, like back-up power, reducing energy cost, strengthening utilities' distribution systems and storing surplus renewable energy.”