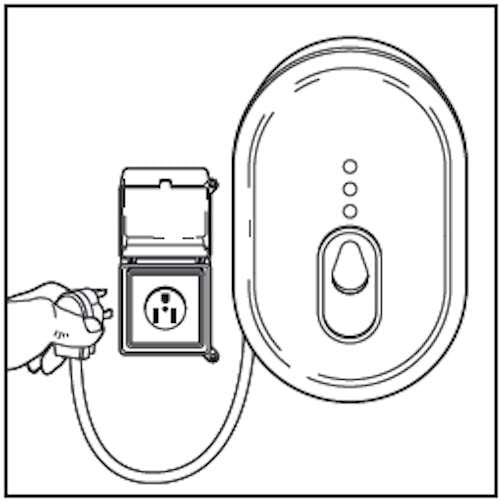 Perhaps the rise of the electric car market is the chance for companies like GE to get involved with a new market, the transportation sector. Electricity is the new fuel, and electricity is GE's middle name. Sort of. In any case, GE's WattStation electric car charging station (EVSE) is now available on amazon.com for anybody to buy, and it's set up so that many people could install it on their own.

This sort of DIY electric car charging station (EVSE) sidesteps one of the expenses of buying an electric car. That of installing the charging station. The WattStation sold through amazon.com is the "plug-in" version, which simply plugs into a wall socket with only a small bit of fuss which we'll go over in a moment. Why would you buy a WattStation rather than the EVSE option offered by your electric car dealer? Installing the EVSE yourself may save you some money, especially if you're adept at home wiring installation. Another reason is those cases where you want a second or third charging station available, such at a second house, or a friends house you visit frequently.

The powers that be decreed long ago that electric cars must plug into special purpose charging stations, a.k.a. EVSE or Electric Vehicle Service Equipment. Which means we plug electric cars into a long cord that looks vaguely like a fuel hose, rather than run an extension cord to a power outlet of the sort where you'd plug in a clothes dryer. The WattStation is an EVSE similar in purpose to the ones made by Aerovironment, Leviton and other companies. It just happens to be the first one available through an end consumer store like amazon.com.

Before you go and buy your WattStation EVSE there are a couple preparatory steps to take care of first. They're fairly simple and may require the intervention of an electrician depending on the wiring at your house. While the page on amazon.com doesn't make these steps clear, GE has a document on their website describing the process.

The WattStation requires a 240 volt dedicated circuit supplying 30A of current. There must be a NEMA 6-50 socket next to where you'll mount the WattStation, and there must be a 40A or better circuit breaker. The Leviton 5374-IG (also available on amazon.com) is an example of a NEMA 6-50 socket. The WattStation instruction book also recommends enclosing the power outlet with a locking weatherproof outlet cover, so that the power cord is secure and protected from the weather.

The next step, once your WattStation arrives, is easy. It comes with a bracket you'll screw to the wall, you then mount the WattStation on the bracket, and finally plug the WattStation into the NEMA 6-50 outlet we just discussed. That's it. Mount the EVSE to the wall and plug it in to the grid.

The simplicity of this makes one wonder why there is complexity around installing electric vehicle charging stations. The utility companies and planning commissions have, over the years, raised various concerns over EVSE installation which sometimes make EVSE installation complex. In some localities you are required to get a permit from the local planning commission before installing an EVSE. One reason for this is to verify with the utility company that your neighborhood electrical service won't be overtaxed by adding an electric car to the neighborhood. You wouldn't want the neighborhood transformer to blow up, would you?

Isn't an early step of a new technology gaining mainstream adoption the moment when it gets on amazon.com? This may be something like a right of passage for electric vehicles.