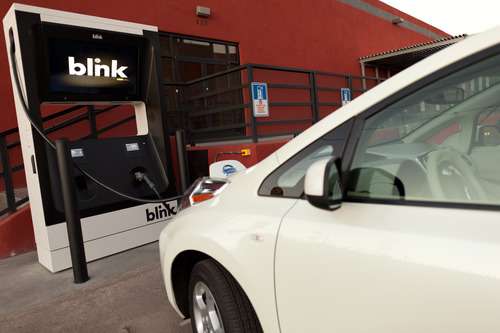 Electric car charging and shopping trips go together like chips and salsa. While you're inside the store anyway, your car can be outside recharging. With the expansion of a partnership between ECOtality and Krogers, announced on Monday, you could refuel your chips and salsa fix while refueling your electric car at the charging station out front.

The expansion announced on Monday will see at least 200 "level 2" (240 volt) charging stations and 25 "level 3" (DC Fast Charge) stations installed at Kroger stores across the country. The installations are receiving federal funding support through The EV Project.

Once installed there will be more than 300 Blink charging stations at Krogers stores.

Kroger is making a $1.5 million investment in the project. It will cover 125 locations in in several key markets including Phoenix, San Diego and Los Angeles. The existing Blink charging stations at Kroger stores include 60 already installed in Oregon and Washington, and 14 in Texas.

It's widely understood by retailers that the longer a customer stays in a store, the more they're likely to spend in the store. Additionally it's known that electric car owners tend to frequent places where they can charge their car. Both those factors make EV charging facilities an excellent addition to the shopping infrastructure.

“As plug-in electric and hybrid cars are becoming more popular with our customers, we are pleased to offer the convenience of electric vehicle charging stations at more of our stores in markets with the highest demand,” said Keith Dailey, Kroger spokesperson. “Kroger is excited to contribute to the growth of this national network.”

“Retailers across the country are quickly realizing the benefits of installing our Blink chargers. Independent research shows that Blink card holders routinely reward these establishments with more time in their stores and repeat business,” stated Ravi Brar, CEO of ECOtality Inc. “Kroger not only recognizes this value, but continues to show its commitment to be a leader in sustainability for the food retail industry. We are thrilled that the nation’s largest supermarket chain, Kroger, chose to expand its EV charging station roll-out with Blink.”