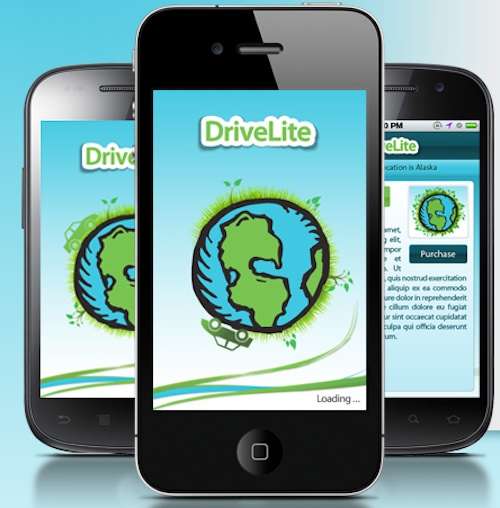 Maybe you can't see your way, yet, into an electric car, and DriveLite helps you offset the pollution from burning gasoline, at the gas pump, using a smart phone app.
Advertisement

One of the side effects of burning gasoline or diesel is releasing carbon (and other unwanted chemicals) into the atmosphere. It's been demonstrated through studying the planets history that every time the atmosphere had high carbon levels was followed by a warming period. Hence many are concerned about the carbon in the atmosphere, and while one way to stop that cycle is with an electric car, electric cars aren't yet for everyone. In the meantime a new service has launched to let you, as an individual, buy carbon offsets at the gasoline pump.

The service, DriveLite, works through a smart phone application providing you options to offset the pollution from the fuel you're buying for your car. Every gallon of gasoline you burn results in 20 lbs of CO2 pollution into the atmosphere. Burnt gasoline spews many more toxicants into the atmosphere than CO2, but our society is overly fixated on the problems from high carbon concentrations in the atmosphere, and not paying enough attention to the other chemicals. Carbon pollution is a leading contributor to climate change, and climate change threatens to flood seaside areas, and drastically change which species survive or die.

This is just an application running in a smart phone, meaning that every carbon credit purchase you make through DriveLite is associated with an action that results in absorbing carbon from the atmosphere. What you buy through DriveLIte is a "carbon offset". Carbon offsets are created by specific projects whose result is to reduce or eliminate CO2 emissions, or creating energy without any CO2 byproduct. For example clean electricity generation from wind, solar, biomass or landfill resources creates carbon offsets, which you can buy through DriveLite.

DriveLite sources the carbon offsets it makes available through programs validated under one of the Kyoto Protocol mechanisms. DriveLite selects projects which are economically viable, not politically mandated, and where the revenue stream from carbon offsets help the project overcome a cost or technological barrier. The company properly registers all offsets it sells, to avoid double-selling, and will also buy offsets ahead of the time they are actually generated to help some GHG reduction projects receive more up-front funding.

You can use DriveLite in the United States, Canada, Australia, the U.K., France and other parts of Europe. Coverage is expanding to other countries. Users in other countries can add their filling station to the DriveLite network just by informing DriveLite.

Tesla-Funded Research Reveals One of The Biggest Mysteries of EV Battery
Tesla Tesla Buyer Nets a Whopping $12,000 Discount After Asking for Reduction
END_OF_DOCUMENT_TOKEN_TO_BE_REPLACED