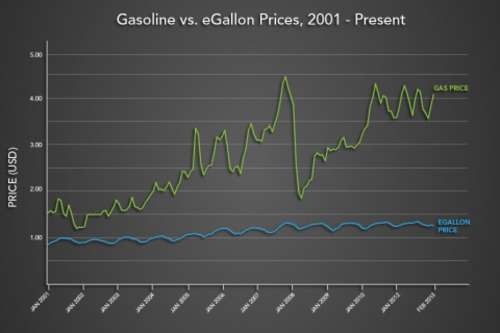 Dept. of Energy says driving electric is like paying $1.14 per gallon

Electricity is a more efficient fuel than gasoline, and lowers the effective cost per gallon of driving a car.
Advertisement

How do you compare the cost of driving an electric car, versus a gasoline powered car? Many look to electric cars as a refuge from high gasoline costs, but because electricity doesn't come by the gallon it's hard to compare the savings. The U.S. Dept. of Energy released on Tuesday the eGallon metric, meant to help drivers compare driving costs between gasoline and electrically powered cars.

According to the DoE, electricity costs the equivalent to $1.14 per gallon across the U.S., however the exist cost per state depends on local factors such as electricity prices. Their method to arrive at $1.14 per gallon is similar to a methodology we covered earlier (see Why electric cars are cheaper to drive than gasoline cars). A year ago, PG&E claimed their proposed EV owner electricity rate would work out to an equivalent fuel cost of $1 per gallon, again using similar reasoning.

The reasoning is fairly simple: The cost of electricity required to drive the distance that 1 gallon of gasoline for a similar gasoline powered vehicle.

More information is available at Energy.gov/eGallon.

The eGallon figure has a simple calculation: MPG of an equivalent gasoline car times the kilowatt-hours consumed per mile times the cost per kilowatt-hour for electricity times.

At 28.2 miles/gallon fuel efficiency of top selling cars in 2012, 0.35 kilowatt-hours consumption per mile averaged over the electric cars available in 2012, and the 12.33 cents per kilowatt hour average electricity cost over the country, the eGallon cost is $1.22.

To calculate a more accurate eGallon figure, one should choose a specific gas car to correspond to a specific electric car, to give the actual efficiency figures (MPG and kWh/mile), and then to use your own local electricity rate. An individual can also affect these numbers by, for example, installing solar panels on their house to lower their personal cost for electricity.

“Consumers can see gasoline prices posted at the corner gas station, but are left in the dark on the cost of fueling an electric vehicle. The eGallon will bring greater transparency to vehicle operating costs, and help drivers figure out how much they might save on fuel by choosing an electric vehicle. It also shows the low and steady price of fueling with electricity,” said Energy Secretary Ernest Moniz. “Not only can electric vehicles save consumers on fuel and reduce our dependence on oil, they also represent an opportunity for America to lead in a growing, global manufacturing industry.”