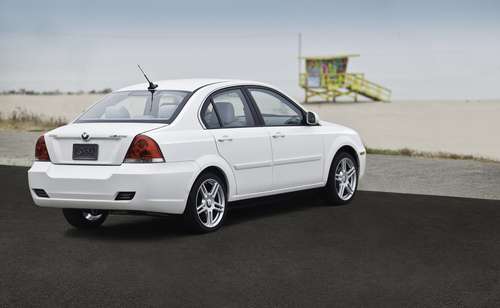 Start-up electric car company, Coda Automotive, has been four years in developing their all electric sedan, is setting up dealerships, and is going into production and launching sales over the next few months.
Advertisement

Coda Automotive was at the Silicon Valley Autoshow this week giving us a chance to see what they've done with their all electric sedan, especially as they're making concrete steps to launch their production and sales operation. In late December they announced selection of Marvin K. Brown as the exclusive Coda dealer in San Diego County, and on Thursday they announced selection of the Del Grande Dealer Group as their first Northern California dealer.

The all electric Coda sedan is an electric car designed by Coda with a 160 mile range and a price competitive with the Nissan Leaf and Ford Focus Electric. The car is built around a chassis made by a Chinese automaker, with parts sourced from a variety of vendors. For example, the drive train components are sourced from UQM, a Colorado based company with over 35 years experience in developing electric vehicle drive train technology.

Coda develops their own battery pack technology, the result of a joint venture with Chinese battery maker Lishen. The pack is a 333 volt 36 kilowatt-hour Lithium Iron Phosphate (LiFePO4) system, configured as a relatively thin unit located underneath the passenger cabin. Coda is also developing a second line of business selling these battery packs as energy storage devices for smart grid deployment.

The car looks like an every-day four door family sedan, and it has features to match. These features include seating for 5 people, a large trunk, an Alpine audio, video and navigation system, iPhone or iPod connectivity, a Bluetooth system allowing hands free cell phone usage, an anti-lock braking system, and six airbags. It comes with a 3 year warranty, 5 year warranty on the drive train and 10 year warranty on the battery pack. The car on display at the Silicon Valley Autoshow looked very nice with good fit-and-finish.

Because of the 36 kilowatt-hour battery pack, the car offers a 150-160 mile range, and by comparison the Nissan Leaf with its 24 kilowatt-hour battery pack offers less than 100 miles of range. Among Coda's marketing materials is the phrase "Range Envy" as a counter-point to the "Range Anxiety" phrase that many (like GM) associate with battery-only electric vehicles. The "range anxiety" phrase refers to the supposed fear an electric car owner supposedly has that they'll run out of battery power, getting stuck on the side of the road. Coda clearly wants us to get the idea that a longer range electric car has the less opportunity for the driver to experience range anxiety. Up until now it was only Tesla that went for longer range electric cars, at a high price, and it's nice to see Coda deliver a long range at a lower price point than Tesla. (for a price comparison between Coda's car and other electric cars, see: Coda Automotive's excellent electric car value proposition)

The car is only being launched in California at this at this time. The company has an "Experience Center" at the Westfield Century City in Los Angeles, and is looking to open another Experience Center in Silicon Valley somewhere. The Experience Center's are store fronts in which the public can learn about electric vehicles, specifically the one made by Coda, but are not sales rooms. The actual sales process occurs at a dealership, and in Silicon Valley that will be the Del Grande Dealer Group.

Del Grande plans to open a Coda branded show-room in the Stevens Creek Automall area and they anticipate expanding to other locations throughout the East Bay, Mid-Peninsula, Sacramento, and San Francisco.

“We’re proud to welcome CODA as our first all-electric vehicle manufacturer to our group,” said Shaun Del Grande, President, DGDG. “Northern California is the perfect location for the launch and proliferation of the CODA 2012 sedan and we can’t wait to introduce the EV to the community of enthusiastic drivers who seek independence from fossil fuel.”

“DGDG is a true champion for EVs and we’ll be thrilled to work with them as our first Northern California dealer,” said Phil Murtaugh, CEO, CODA Holdings. “With more than 40 years of experience in serving the Bay Area, and an outstanding reputation for service, sales and community relations, DGDG is the ideal partner for the progressive and fast growing Bay Area electric vehicle market.”