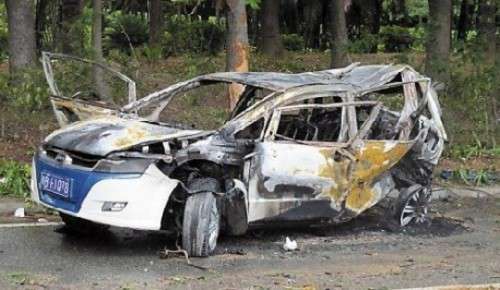 BYD electric taxi fire caused by collision, rather than the batteries

A couple months ago an electric taxi in China caught fire following a collision, a recent report from the Chinese government confirms the fire was not due to the battery pack, but due to the collision causing a short circuit.
Advertisement

On May 26 in Shenzhen China, an all electric taxicab constructed by BYD (a BYD e6) was involved in a crash, caught fire, killing the occupants. While there are hundreds of thousands of car fires every year in the U.S. alone, any fire involving an electric vehicle is catching extraordinary attention. The latest news from China, is that Chinese officials have released a report saying the fire was not due to an exploding battery pack but due to the collision.

The collision occurred at 3AM when a drunk driver crashed a Nissan GT-R into the BYD e6 electric taxi, and then collided with another gasoline driven taxi. The GT-R was traveling at over 180km/h, and the driver ran away largely unharmed only to surrender himself later. The occupants of the second taxi suffered minor injuries. The passengers of the BYD electric taxi were not so lucky, they were killed immediately and in any case the fire was severe enough they were unlikely to have survived anyway.

There has been speculation the fire was due to the battery pack. The Chinese automaker (BYD) and battery maker have denied this, and recently issued a statement citing a report from the Chinese government.

A Reuters report quoted from a BYD statement, "In the accident, the power batteries of such vehicle did not explode, 72 single-cell batteries (accounting for 75 percent of all the 96 power batteries) did not catch on fire. The designs of the battery system in relation to the installation layout on the vehicle, the insulation protection and the high voltage system are reasonable. No flaws in the safety design of the vehicle were revealed."

The company did say that while 25 percent of the battery cells were on fire, the battery plate was intact with no cracks. The battery compartment was "seriously deformed" and the power battery pack and high-voltage switchbox were "seriously compressed" from the accident. The company says the accident produced a short circuit and electric arc that ignited combustible materials. Batteries contain quite a bit of energy, which can act as the fuel for a fire whether or not the battery cells themselves catch fire. The BYD e6 electric taxi carries a massive 60 kilowatt-hour battery pack.

The incident seems tailored to be connected to the overamplified stories concerning the Chevy Volt fire last year. That fire occurred, coincidently, almost exactly a year prior to the BYD crash. The cause of the Volt fire was eventually found to be the impact crushing part of the battery pack, causing a short circuit, rather than a flaw in the battery chemistry. That did not stop some political pundits from trying to misuse the Volt fire for political gamesmanship. Likewise, if the Chinese government report is accurate, the BYD taxi fire is also a case where the fire was caused by the collision rather than any flammability of the cells themselves.

The hyper-concern over whether electric vehicles are safe is curious in contrast to the large number of gasoline car fires, and the large number of people killed from those fires. Perhaps it is a matter that because electric cars are new, that we collectively distrust them simply because they are "new" and "different" from the gasoline vehicles we are collectively accustomed to driving. Consider the contrast, how many gasoline car fires are there every day that go unreported because they're so common, yet one electric vehicle catches fire and it is international news. Somehow we can collectively drive around with tanks full of explosive liquid and think we're safe, but are worried about electric car batteries whose lithium-iron-phosphate chemistry is widely regarded as being one of the safest lithium ion chemistries. Is this an irrational fear of the unknown?