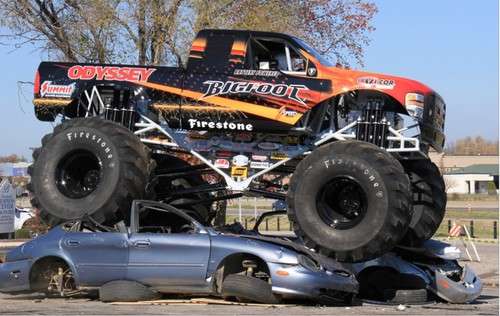 Proving that electric vehicles don't have to be puny slow wimps, Team BIGFOOT have built an electrically powered BIGFOOT and will be giving car crushing demonstrations in Kansas City this weekend.
Advertisement

Monster truck shows are never about clean green transportation with no tailpipe emissions, right? Electric vehicles can only be slow boring ugly golf carts, right? Wrong, on both counts. Team BIGFOOT, however, has built an electric Monster Truck which the team showed last November. This weekend the all electric Odyssey Battery BIGFOOT Monster Truck will be giving car crushing demonstrations at the Autorama Car Show in Kansas City.

The battery powered BIGFOOT Monster Truck, a.k.a. BIGFOOT #20, was unveiled in early November in a St. Louis parking lot. During that demonstration driver Jim Kramer spent 20 minutes crushing donated junked cars without losing power. An onlooker said "I've been going to monster truck shows for years, and I've never actually heard the cars get crushed under the tires. This thing is just unreal!"

Since the November appearance the BIGFOOT team has been testing their electric BIGFOOT, to ramp up its performance potential.

What's key for this purpose is that "full torque at 0 RPM" concept. Unlike fossil fuel gasoline vehicles, electric motors don't have to rev up or otherwise build up a head of steam. Instead, as soon as you give power to an electric motor it goes. This torque can be used for hauling loads, for high acceleration electric dragsters, or for crushing cars.

What makes an electric car like the Nissan Leaf more sedate? While an electric motor CAN deliver full torque at 0 RPM, it doesn't have to do so. It all depends on how powerful is the controller and the throttle response curve it's configured for. In a Monster Truck application they'd configure this curve to provide lots of power, and everything depends on the willingness of the driver to gun the throttle. For a normal family sedan like the Nissan Leaf, the controller would have a more sedate throttle response.

Fans will be able to see the truck in operation all weekend long at the Autorama Car Show in Kansas City. Car crushing demonstrations begin on Friday evening and are spread out over the weekend with 7 total sessions.