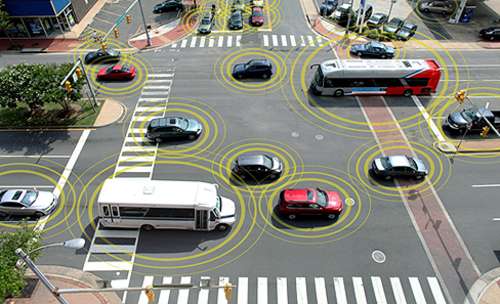 Cars that talk to each other, vehicle-to-vehicle communication, could reduce or eliminate traffic jams, traffic accidents, increase the efficiency of driving, reducing fuel use, and usher in a wave of robotically driven cars, if a test in Ann Arbor Michigan goes as planned.
Advertisement

The computerization of cars has been underway for a couple decades, but we are on the cusp of a whole new level of computerization and new features resulting from high technology. Ann Arbor, Michigan is hosting a U.S. government sponsored real world test, involving over 3,000 cars, trucks and buses outfitted with wireless communication technology for continuous data exchange between vehicles, and issue danger alerts to vehicle drivers.

The participating vehicles will be outfitted with one of three gizmos: Vehicle Awareness Device (VAD) which securely transmits your vehicle location to nearby vehicles. Aftermarket Safety Device (ASD) which adds the ability to receive data from nearby vehicles, using that data to warn drivers of imminent crashes. ASD + Data Acquisition System (DAS) which adds the ability to record data from the system, allowing drivers and researchers learn more about how Vehicle-to-Vehicle (V2V) communications can improve the safety of the roads.

The program is being managed by the Univ of Michigan Transportation Research Institute (UMTRI), who is currently taking applications for interested drivers to participate in the program. Overall the goal is to learn more about the potential of Connected Vehicles, using short range wireless data exchange, to build a map of the nearby vehicles, giving drivers better information about driving conditions, or even to assist development of automated driving systems. The hope is that, by using machines to communicate in ways and at a pace that drivers simply can't, there will be a great reduction in car accidents and the attendant loss of life or quality of life.

This vehicle-to-vehicle communication, or data exchanged between vehicles, could give drivers better information, but that could simply result in information overload on the part of drivers. Additionally advances in computer technology make it possible for on-board computers to respond more quickly than a human can. As the technology develops we'll reach a point where we ask, why do humans need to do the driving, why don't the cars drive themselves?

It's also possible for the transportation infrastructure, turn signals, street lights, and the like, to be equipped to receive the data as well, and to change how the infrastructure runs. This vehicle-to-infrastructure could be used by traffic managers to get a better picture of actual traffic flows. They could better predict infrastructure needs, as well as detect problems on the roads such as a large number of cars swerving at one location could indicate a pothole needing repair.

"We think this is really the future of transportation safety, and it's going to make a huge difference in the way we live our lives," said Scott Belcher, president of the Intelligent Transportation Society of America, which promotes technology solutions to transportation problems.

The V2V system being tested in Ann Arbor is a long ways from the RoboCar vision of a fully autonomous vehicle fleet driving on the roads. Fully autonomous vehicles are thought to have huge potential benefits from reducing the number of traffic jams, reducing the energy used for driving through greater driving efficiency, reducing the number of traffic accidents, and freeing humans from the task of driving cars so we can do other things while being driven around. Data exchange between cars and between cars and the transportation infrastructure are a necessary part of implementing fully autonomous transportation systems, but is not the only technology to be developed. Cars must also be able to interpret the data, maintain a map of all nearby traffic, and to automatically drive the car based on the behavior of neighboring cars.

U-M Vice President for Research Stephen Forrest said, "We're in the middle of reinventing the automobile and this safety pilot is a really big chunk of that. There are tremendous opportunities here to build the latest and newest."