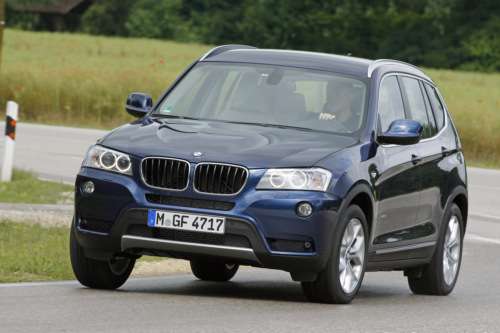 BMW’s designers and engineers must be happy. Not only is the BMW X3 one of the three finalists for North American Truck of the Year, it just got named a Top Safety Pick by the IIHS. That means that they achieved the IIHS’s highest rating, “Good,” in all of their tests, including side impact, rear impact, frontal off-set crash, and roof crash. Other possible ratings are acceptable, marginal, and poor.

The IIHS website notes that: “Side crash tests are good assessments of occupant protection when vehicles are struck in the side by SUVs or pickups,” and that side crashes account make up about 25% of passenger vehicle fatalities because a vehicle’s sides don’t have the crumple zones of the front and back. The IIHS uses a 3,300-pound SUV-like barrier to hit the driver’s side of the vehicle at 31 mph. It uses small dummies representing women or children as they’re more likely to suffer head injuries.

The side impact test of the BMW X3 showed, for both driver and rear seat passenger, “a low risk of any significant injuries in a crash of this severity,” according to the IIHS. It added, “The dummy’s head was protected from being hit by any hard structures, including the intruding barrier, by a side curtain airbag that deployed from the roof.”

The frontal offset crash test is meant to assess the vehicle’s structural design. The IIHS website notes that about 50% of passenger vehicle fatalities are caused by frontal crashes. They test the vehicles by sending them into a barrier at 40 mph.In the frontal offset test of the BMX X3, “Dummy movement was well controlled… Measures taken from the dummy indicate a low risk of any significant injuries in a crash of this severity.”

The roof crash test is meant to see how a vehicle’s passengers would do in a rollover. They use a metal plate to push against one corner of the roof and measure how much force it can sustain before reaching 5 inches of crush to determine the strength-to-weight ratio. Again the BMW X3 did well, with a ratio of 4.69, which BMW says is higher than many of its competitors.

Vehicles are also required to have electronic stability control as standard equipment, important in avoiding rollovers, to obtain a “good” rating.

“Safety has always been a top priority at BMW and our vehicles have always done well in IIHS tests,” said Tom Baloga, Vice-president Engineering (US) for the BMW Group. “As well as the X3 will protect its driver and passengers in a crash we believe that it is even more important that the X3 has been engineered to help the driver avoid the crash in the first place.”

The X3 not only has front, side and head airbags, it also has knee-protection airbags. Its Dynamic Stability Control and intelligent all-wheel drive system, xDrive, help keep car and driver on the road. The X3 can also be equipped with BMW Assist, which sends data to the BMW Assist emergency call center in the event of a serious crash. It assesses the likelihood of severe injury so that first responders will be prepared on arrival.