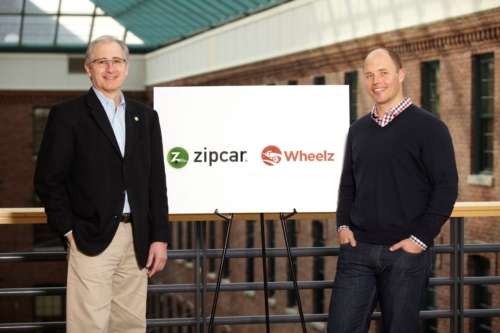 Zipcar, the world's most popular car sharing network, has announced it will be investing in the startup car sharing company Wheelz.
Advertisement

Zipcar will become a lead investor in Wheelz, a new peer-to-peer car sharing service based in Palo Alto, CA. Zipcar will be investing $13.7 million in Series A round of funding into Wheelz.

For those that don't know Zipcar is an extremely popular car-sharing service that allows people to rent cars by the hour, instead of the whole day. It helps those in urban areas avoid the high cost of owning a car, while enjoying the benefits or being able to use one when needed. Zipcar has roughly 673,000 members and 8,900 vehicles throughout the United States, Canada and the United Kingdom. The service is extremely popular around college campuses.

Wheelz is the first peer-to-peer (P2P) car sharing company. The main focus of Wheelz is on college campus communities. The service allows people to rent out cars like Zipcar, but an individual vehicle owner rents out their personal vehicle. Unlike Zipcar which actually owns and operates the vehicle themselves. This model empowers car owners to earn money from their car when they are not using it while providing convenient and affordable access for car borrowers.

"Based on our analysis and primary research, we believe P2P could expand the total addressable market for car sharing," said Zipcar Chairman and CEO Scott Griffith. "We chose to make this investment because we believe that Wheelz has the right leadership, technology and business model to succeed in the emerging P2P space."

Another investor in Zipcar will be Detroit-based Fontinalis Partners, which is a leading transportation technology strategic investment firm. Mark Schulz a 30-year automotive industry veteran, former President for International Operations at Ford Motor Company and Founding Partner at Fontinalis, will be joining Scott Griffith on the Wheelz board. Also joining the board is Jim Freer, former vice-chairman of Ernst & Young.

"We are committed to investing in entrepreneurs and accelerating the growth of breakthrough technologies and business models such as Wheelz to explore that future." said Bill Ford, another Founding Partner of Fontinalis Partners.

Jeff Miller, founder and CEO of Wheelz., added "Zipcar knows and understands the business complexities of car sharing better than anyone on the planet; we will benefit tremendously from this expertise as we continue to grow. Equally exciting, their knowledge related to operating within university communities and deep ties to the automotive ecosystem will be invaluable as we scale the business."

It is important to note that Zipcar will not have majority ownership in Wheelz. Zipcar will account for its investment under the equity method of accounting. Meaning it expects to record its share of Wheelz' net loss on this basis in the amount of approximately $1 million in 2012, which was factored into the guidance Zipcar provided in conjunction with the release of its 2011 fourth quarter results on February 14th.  There will be no impact to Zipcar with respect to revenue or Adjusted earnings before interest, taxes, depreciation, and amortization.

Seems Zipcar has the right idea here to invest in Wheelz as it is getting in on what could catch on as the new big peer-to-peer sharing service. The only hurdle, convincing people to lend their personal cars to complete strangers.