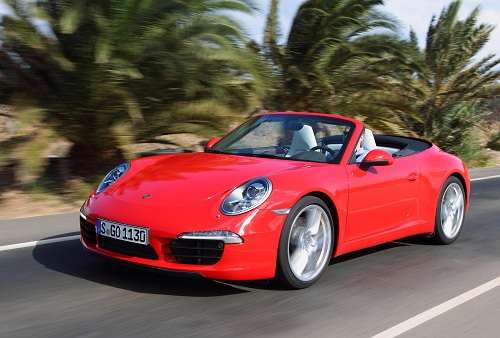 Porsche models not to be missed at the Geneva Motor Show

Porsche will be unveiling the new Porsche Boxter and Boxster S at the upcoming Geneva Motor Show (March 6th-18).
Advertisement

The new Porsche Boxster will arrive offering driving enthusiasts a new generation for the benchmark roadster from the German marquee.

The technical highlights of the new Boxster are its all-new lightweight body, new flat-six engines with direct injection. It will also have a completely revised chassis.

It will be shedding a few pounds, have a longer wheelbase, and also feature widened track and larger wheels which significantly enhance the driving dynamics of the mid-engined sports car. These attributes, combined with many other new features including electro-mechanical power steering, result in the new Boxster not only offering superior performance but also up to 15 percent better fuel economy.

The Boxster and Boxster S are powered by the well known boxer-six cylinder engines with direct gas injection. The fuel efficiency of these engines will be improved by electrical system recuperation, thermal management and start/stop function.

Both models feature a manual six-speed gearbox as standard (Thank You for offering stick shift Porsche!) with the seven-speed dual-clutch Porsche Doppelkupplungsgetriebe (PDK) available as an option. (No Thanks for making me put use a word no human knows how to pronounce outside of the Porsche engineering team.)

Porsche will also be unveiling the 911 Cabriolet to a European audience for Spring. Obviously a great time to go buy a convertible.

The new Porsche 911 Cabriolet offers sporting drivers the option to enjoy the renowned dynamic qualities of the 911 Coupe combined with the added versatility and driving pleasure offered of a convertible with a folding roof.

The 911 Cabriolet naturally shares its new, high tech aluminum-steel body with the Coupe, and the convertible extends this innovation to its all-new, unique hood. When raised, the design of the hood ensures the iconic 911 roof line is retained in its entirety. Intelligent lightweight design, including the use of magnesium in the hood frame, ensures reduced weight for increased responsiveness, lower fuel consumption and greater comfort. As is the case with the Coupe model, the new 911 Cabriolet is significantly lighter overall than its predecessor.

As well as debuting and unveiling the latest and greatest Boxsters, Porsche will also have the European premieres of the Porsche 911 Cabriolet and Panamera GTS at the Geneva Motor Show.