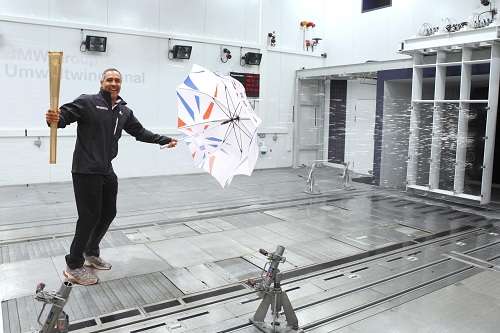 The Olympic Torch, a symbol of the nations of the world coming together, is being put to the test in BMW Group's state-of-the-art extreme weather testing center in Munich.
Advertisement

The state-of-the-art building, officially named the Energy and Environmental Test Center (ETC), brings some of the world’s most extreme weather systems into one building. Instead of testing vehicles though BMW is utilizing it for making sure the Olympic Torch doesn't burnout ahead of the 70-day Olympic Relay that will take place around the United Kingdom.

The ETC, has a temperature range of -20C to +55C, while the wind speeds of up to 280 km/h (174 mph) which are stronger winds than are generated in most hurricanes. The testing center can replicate virtually any type of environment from the Arctic Tundra to the Sahara Desert.

The facility can also replicate an altitude of 4,200 meters (13,779 feet) above sea level, four times the height of Ben Nevis, the highest Mountain in the UK.

BMW is the official partner of the London 2012 Olympic and Paralympic Games. So it was a natural choice to use the BMW testing center for testing the Olympic Torch.

As the Olympic Torch travels around the UK it will have to stay alight in all British weather. This includes freezing temperatures at the summit of Snowdon, swirling winds on the Shetland Islands and the summer heat of the South coast of England. Let's not forget the inevitable summer shower since it is the UK. All of these weather conditions are being testing in the ETC.

The Torch stood up to some extreme weather conditions at the BMW facility, enduring -5C to +40C temperatures, +50 mph winds, snow packing the front of the torch and driving rain. You would think the flame would go out, but it stayed lit throughout testing.

Daley Thompson, who won the Gold Medal for the decathlon in 1980 and 1984, experienced some of these conditions himself. He agreed to stand with the Olympic Torch in the ETC. “The Olympic Torch Relay is set to build excitement for London 2012 throughout the UK, so it’s really important that the Torch can cope with our unpredictable British weather.” commented Thompson.

As part of its partnership with the London 2012 Olympic Games, BMW will provide torchbearers that will include dealership employees and staff. The Olympic Torch Relay is set to start it's 70 day tour on May 19th, and will include over 8,000 excited UK participants. The torch will travel within 10 miles of 95 percent of the UK’s population.