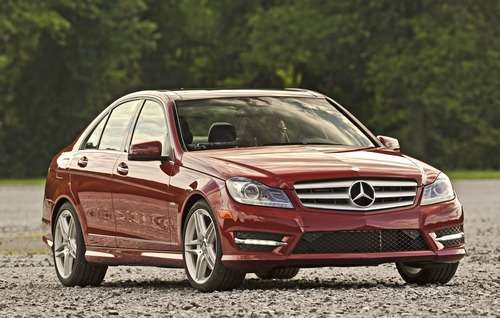 Mercedes-Benz has reported strong September sales in the US. The German luxury automaker sold a total of 23,897 vehicles for September 2011, the best September on record for the company.
Advertisement

The best selling Mercedes-Benz vehicle for the month of September was the C-Class. There were 6,865 C-Class vehicles sold, a 32% increase compared to 2010. The C-Class is important for the company because it attracts first-time and young buyers to the brand. When the new redesigned C-Class came out in 2007, it won many accolades and awards. The C-Class was awarded “Car of the Year” from Wheels Magazine in Australia and “Japan's Import Car of the Year” for 2007-2008. The most notable award was given out by Top Gear Magazine, which awarded the C-Class "Executive Car Of The Year” for the 2007 Top Gear Awards.

The E-Class, in its 9th generation, had sales of 5,122 for the month of September. The E-Class is Mercedes-Benz's flagship model as they are used in Taxis in Europe and older iterations are used as taxis around the world. The E-Class has been in continuous production going as far back as the 1950's.

Other Mercedes-Benz models like the GL-Class and CLS-Class posted improved numbers as well. The GL-Class, was third in volume with September sales of 2,541 vehicles. The brand new CLS-Class, a coupe based off the C-Class, had a 399.3% gain compared to September 2010. The SLK Roadster had an increase in numbers as well, gaining 50.8% for the month of September.

Mercedes-Benz sold 25 of its SLS AMG Supercars. Bringing total sales for the year of the supercar to 454 vehicles. The SLS AMG is a modern interpretation of the 300Sl Gullwing. It has a 6.2L-563hp engine with a dual-clutch semi-automatic transmission.

SmartCar, a subsidiary of Mercedes-Benz, reported slight gains for September. Sales of the Smart ForTwo, a microcar built for city use, was slightly up compared to last September. The Smat ForTwo vehicle sales totaled 469, compared to 422 vehicles sold in September 2010.

All in all Mecedes-Benz showed strong September sales, in an economic time where many Americans feel strapped for cash. The luxury automaker has been able to showcase its vehicles and make sales to the public. The September sales how the company is maintaining steady growth. Car buyers are coming to the brand to buy great cars like the C-Class and E-Class and the company's other models.