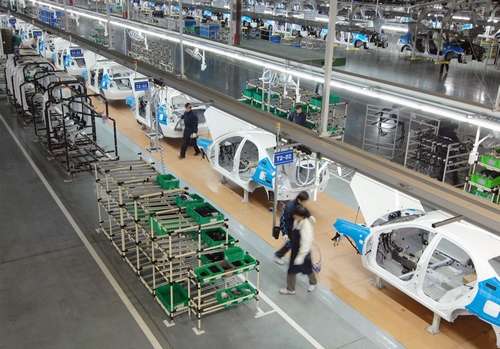 Kia has announced that it plans to build a third manufacturing plant in China. This is in order to meet increasing demand in the country and to maintain its sales momentum in the Chinese market, which has been strong.
Advertisement

When the plant is built, it will be able to produce 300,000 units each year. Combined with Kia' other two plants in China, production capacity will increase from 430,000 to a total of 730,000 units per year.

The new plant will be located about 2 miles from Kia’s second plant in Yancheng’s Economic and Technology Development Zone. This will allow Kia to to utilize the existing infrastructure and workforce. It will create a cooperation between the plants, to allow for better production capabilities.

Construction of Kia's new plant should begin by the 2012. It should be completed by the middle of 2014 and production will begin then as well.

“Kia is one of the fastest growing automotive companies in the Chinese market and this would not be possible without the continuous support and cooperation from the governments and citizens of Jiangsu and Yancheng.” said Mr. Chung.

“With our third China plant, which we will begin construction at the end of next year, Kia will be well-positioned to provide its growing Chinese customer base with stylish, safe, reliable and high-quality vehicles while also helping to further develop the local economy and improve people’s lifestyles,” he added.

Kia has had immense success in China in last few years. Sales of locally-manufactured Kia vehicles reached 101,427 units in 2007, and the company posted a 40% year-on-year increase in 2008, selling 142,008 units after the second DYK plant was put into full operation.

For 2011 (through the end of October), sales of locally produced vehicles reached 341,682 units. Spurred by the introduction of the highly competitive mid-size K5 sedan, which is known as the ‘Optima’ in markets outside of Korea and China. As well as the sub-compact K2, a version of the all-new Rio for the Chinese market.

Kia feels it will be able to reach the 2011 sales goals for vehicles produced in China of 430,000 units. September was the best month in China for Kia, with 43,508 vehicles delivered.

Kia has taken a big bite out of the Chinese market, going from a 2% market share in 2007 to 3.5% through September of this year. Making Kia one of the top 10 vehicle manufacturers in China, from being 18th only a few years ago.

If you take into account Kia's sister company, Hyundai which has sales of 720,000 units, the combined sales are expected to reach 1,150,000 units in 2011, putting it third in the Chinese market, behind only VW and GM.

“The Chinese market has been the key focus for many global automakers, and this trend has resulted in Chinese customers demanding better cars. So it’s imperative that we capture the hearts of our Chinese customers by giving them an unsurpassed ownership experience.” commented Mr. Chung.