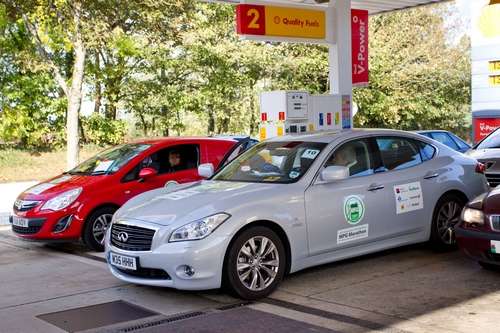 In the 2011 ALD Automotive/Shell FuelSave MPG Marathon the Infiniti M35h demonstrated next-generation hybrid technology, by driving over a demanding 370 mile route. The car returned 36mpg, which was 7 percent better than its official combined figure of 33mpg. Most of the other hybrids who participated in the competition, both diesel and gasoline powered, fell short of their official combined fuel consumption figures.

In winning the hybrid class in the 2011 ALD Automotive/Shell FuelSave MPG Marathon, the Infiniti M35h showed how its innovative system, a one motor/two clutch system enables zero-emissions running to be utilized more often, for longer periods and at higher speeds than other hybrid systems.

The Infiniti M35h cruised quietly on electric power for 185 of the 370 mile route. Basically half the route was completed with the 3.5-liter gasoline V6 engine switched off. On one 54 mile stretch of the economy run, the M35h ran for 30 miles on power from the lithium-ion batteries and electric motor. Quite impressive!

“Infiniti’s Direct Response Hybrid system was developed to offer a no-compromise way of providing both performance and fuel economy and this result demonstrates how successful that approach has been,” said Wayne Bruce, Communications Director.

“Achieving low fuel consumption in the official cycle tests might look impressive but helps no one if it is not readily achievable in real life.

The Infiniti M35h gasoline V6 and electric motor provides 359 bhp . This is no Prius, as the car has a top speed of 155mph and acceleration from 0-60mph in 5.5 seconds. The top speed is actually limited to 155mph! It is also a comfortable five-seat luxury sedan.

As Guinness World Records confirmed in August this year, its standing quarter mile time of 13.9 seconds makes it the fastest hybrid in production. With an advertised 33mpg rating, it truly is a unique hybrid.

The next-generation hybrid includes an eco setting in the Infiniti Drive Mode Selector. As well as changing throttle response and transmission mapping, for earlier gear changes, it activates Infiniti’s unique Eco Pedal. Pedal pressure is gently modulated to encourage maximum engine efficiency, meaning the pedal will push back when the driver is needlessly heavy with the right foot. The Eco Pedal operates in conjunction with an indicator light system that clearly shows when the car is at its economical best.

“We drove as normal and the car did all the hard economy work for us,” said one of the drivers, British motoring journalist Bob Murray. “The Eco Pedal and economy warning light were invaluable aids, while the dashboard graphic showing the V6/electric power delivery made it easy to make the most of the electric motor. We were often cruising along on battery power at over 60mph.”

The competition was organized by the FleetWorld group. This this was the 10th MPG Marathon, and 26 vehicles took part in the two-day event which covered 370 miles roads across hilly terrain in southern England.