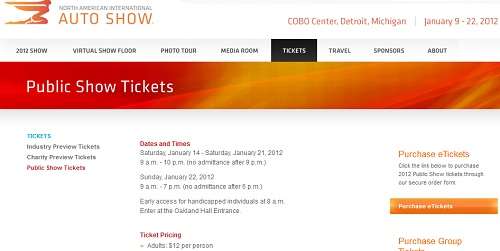 For all of you car enthusiasts looking for Cyber Monday deals, you are in luck! Google has joined the wide array of Cyber Monday deals by offering half price tickets to the 2012 North American International Auto Show (NAIAS)!
Advertisement

The deal is being offered through Google Offers, Google's new e-commerce venture to compete with LivingSocial and GroupOn. You are allowed to purchase 2 tickets for $6, which is 50% off the cost of the $12 full retail price. The tickets are good for a 1-day admission through January 14th-22nd, 2012 during the North American International Auto Show public viewing days.

As I write this the clock is ticking as there is only about 16 hours left to get tickets at 50% off, so you better hurry! Click here to redeem the offer.

Since the Big 3 (Chrysler, Ford, and GM) are headquartered in Detroit, the NAIAS is considered an important place for the American automakers to show what they will be offering in the future. Especially since GM and Chrysler went into bankruptcy and have suffered a brand image issues.

The show features unique awards, the EyesOn Design Awards which are presented by the Detroit Institute of Ophthalmology (DIO). The EyesOn Design Awards serve as an extension of the DIO's annual EyesOn Design car show held each June to honor and celebrate the past, present and future of automotive design. In addition to recognizing major design achievement in the automotive industry, funds raised by both EyesOn Design events support the DIO's mission to assist and educate the visually impaired, help preserve vision by public and professional education and support research related to the eye.

Additionally the show also awards the North American Car and Truck Of the Year. A prestigious honor for many vehicles recognizing the best new models being offered that year.

The Michelin Design Challenge is considered one of the most interesting events and features at the show. Hundreds of individual designers, teams, studios, and companies from over 50 countries submit full-size vehicles, scale models and computer-generated renderings to compete in this prestigious challenge. It is judged by top international designers.

I am sure the 2012 North American International Auto Show is something you want to attend. Be sure to get your half-price tickets through Google Offers.