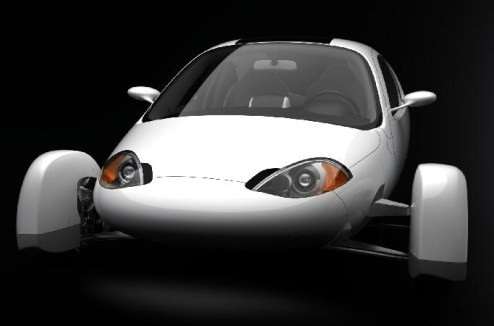 Aptera, the electric car maker, has announced it will be shutting down. The company's website and President and CEO, Paul Wilbur, have confirmed that company will be closing today.
Advertisement

Aptera was considered one of the most interesting electric-car start-ups. The Aptera2, the company's only model, was a forward thinking egg-shaped three-wheeled car that could achieve an 300mgp mgp equivalent on a 120 mile charge. Mainly due to it's highly aerodynamic body shape.

The company is closing due to insufficient financing and funding. Aptera was hoping to raise $150 million to get a federal matching grant from the Department of Energy (DOE). These much needed funds would have made it possible to get a 4-door electric car into production, and available to sell on the market. However, the company was only able to raise about $40 million. This was just not enough to carry Aptera through this horrendous economy.

The company employs only about 30 people. The DOE grants would have made it possible to build a commercially viable 4-door electric-car from parts from the remnants of a former General Motors plant in Moraine, Ohio. The goal was to eventually employ 1,400.

“We were so optimistic that the company would move forward that we were in discussions to reactivate a mothballed automotive plant in Moraine, Ohio. In the past months we had engaged with the labor union that operated that facility to discuss the hiring of 1,400 new job opportunities. These jobs would have reactivated talented workers who had been dismissed when the facility was closed.” said Paul Wilbur, President and CEO of Aptera, in a statement today,

He added, “We continued development of our patent-pending composite manufacturing system that enables energy efficient vehicle production by drastically reducing vehicle weight (by as much as 30%) while tripling its strength. This same patent pending system allowed us to finish the surface of our composites without manual finishing and without the high capital cost of a typical automotive paint shop. In all, the process would save nearly $750-million versus a typical volume auto assembly plant start-up...We remain confident, even as this chapter closes, that Aptera has contributed tech new technologies to build a future for more efficient driving.”

Aptera's story is reminiscent of many automakers that have failed throughout the years, but had great ideas. Preston Tucker and his Tucker cars, which had revolutionary safety equipment and standard features for the time. John DeLorean and his famed DeLorean sports car, that can never be forgotten since it was featured in the “Back to the Future” movies with Michael J. Fox. As well as a host of other car makers.

Tesla, the well-known electric-car company, even came close to going under due to the financial meltdown. Only cash infusions from larger automakers and a grant from the DOE allowed it to stay afloat. As well a public stock offering, considered to wildly overvalue the company, were able to get it back on it's feet. Tesla came close to the fate of Aptera.

Even though Aptera didn't make it, it will be remembered for trying to compete in one of toughest places to do business; designing, manufacturing, and selling cars.