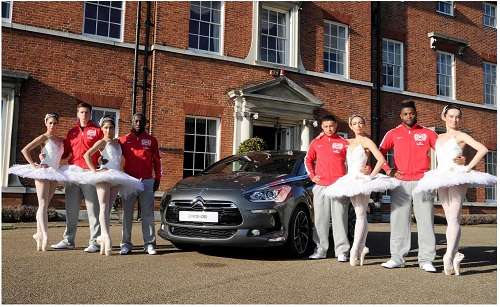 Four members of Arsenal, the world famous English soccer team, are taking part in an interesting TV commercial for the new and stylish Citroen DS5. Instead of Citroen showing the players battling it out for victory on the field, they are showing their dancing skills with ballerinas!
Advertisement

Citroen is trying out what they feel is a bit of an edgy marketing campaign for the Citroen DS5 with the mixture of “footballers” and ballerinas. As odd as it sounds, it seems this might pay off.

When most people think of soccer (football in most other countries) we don't necessarily think of graceful moves and dancing. However, it seems the players were not that bad. In the main sequence the Arsenal players Alex Song, Wojciech Szczesny, Alex Oxlade-Chamberlain and Bacary Sagna arrive at the stately and grand Brocket Hall where they meet four ballerinas.

The commercial shows the players receiving instruction from these star ballerinas of the English National Ballet and choreographer and dancer Jenna Lee. The campaign’s surprising narrative is a play on Citroen DS5’s tagline ‘The Refined, Redefined.’

They start by warming up and stretching. This is supposed to highlight the contrast between the two types of warm-up routines. The players then try some ballet steps, aided by the ballerinas. After an intensive dancing and training session from the star ballerinas, the players and ballerinas perform together. After this the players get into the new and stylish Citroën DS5 and drive off.

“With this project, we wanted to take their top class footballers, renowned for their refined style of football, and put them into a new environment that would redefine their sporting talents.” said Jules Tilstone, Marketing Director at Citroën UK. She added, “It was a fantastic experience working with the Arsenal players and English National Ballet’s dancers in this way - a unique opportunity to bring together two contrasting worlds with individuals who are all at the top of their game.”

The 90-second TV commercial was released along with a ‘Making-of.' Additionally two ‘Behind-the-scenes’ videos will be revealed later this month. These feature the players trying out some more contemporary dance moves. Szczesny apparently has a musical talent that surprises both the ballerinas and his fellow players.

“Our players really enjoyed the shoot, and the chance to demonstrate that their qualities of strength, agility, balance and focus are just as much a part of ballet as they are in football.” said Vinai Venkatesham, Head of Global Partnerships at Arsenal Football Club.

Arsenal is one of the leading soccer (or football) clubs in world, that has a strong history of success. The Club is celebrating its 125th anniversary in the 2011/2012 season. It's not surprising they have sponsorship partners like Citroen, but ballet... really? Not sure how much they had to pay the players to do this commercial.

I will admit though, I think the Citroen DS5 commercial is quite funny and entertaining to watch. Even though the nice stylish lines of the Citroen DS5 will not be coming to the US, or a love of soccer, I can still enjoy both via the internet.

Tsingshan's Threat to Tesla: EV Maker Is In Battery Crosshairs
Tesla-Funded Research Reveals One of The Biggest Mysteries of EV Battery
END_OF_DOCUMENT_TOKEN_TO_BE_REPLACED