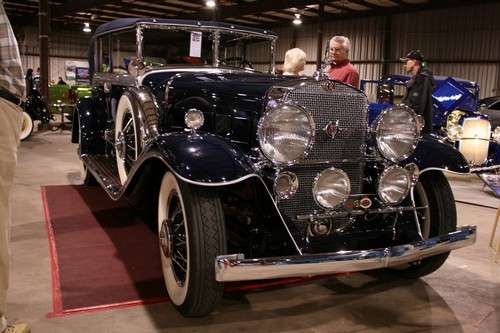 Blast from the Past, 22nd Annual East Coast Indoor Nationals

If you loved and remembered cruising and the 60's and 50's, then the East Coast Indoor Nationals was the place for you to be this weekend. The show brought back memories of drive-ins, route-66, service stations, and the nostalgia of yesteryear.
Advertisement

If there was a car you loved during the 60's and 50's, it was at the 22nd Annual East Coast Indoor Nationals. There were amazing looking hot-rods, rat-rods, muscle cars, jalopies, classic cars, antiques, and custom motorcycles. This is one of the largest Pre-1973 car shows on the East Coast, and it all happened at the Maryland State Fairgrounds.

There were lots of cars at the show that I wished I owned. To name some would take up too much of this article though. My personal favorite car at the show, of which many spectators and visitors agreed, was a 1931 Cadillac V-16. Yes you heard that right, a V-16! I was not even aware that Cadillac made cars that had V-16 motors, let alone that early. Looking at the Cadillac's smooth lines, mighty stance, and plush interior made it easy to see why Cadillacs were once the pinnacle of luxury cars. They have fallen far, as new Cadillacs should not be used in the same sentence with the word “luxury.”

Cadillac made about 4,000 of these monstrous and stunning motors, which were attached to various body styles. The owner said there are only 4 remaining in the world like the one he owned. When I inquired, “What is the estimated value?” he paused “Well.... I had it appraised for half-a-million dollars!” Better not get to close to that perfectly restored body with it's flawless paint, because you wouldn't want to call your insurance agent if you hit this Cadiallic!

The more common key phrase at the show was “Chevy.” There were everywhere you looked! Bel-Airs, Chevy II, Novas, Impalas, Camaros, etc. There were lots of Ford roadsters and custom hot-rods build from Fords, but boy there were so more Chevys there, I would have a hard time counting all of them.

If you were a GM fan and Chevrolet fan you would have been happy. There was a strong showing of Pontiacs and Oldsmobiles as well. It is nice to see these cars at shows, since you wont be seeing them at any dealerships, unless you are buying used of course.

As you were walking around a Live DJ played music from the 50's and 60's. Candy Clark made an appearance at the show. She signed autographs and took pictures with eager fans. She played Debbie Dunham in the 1973 movie “American Graffiti” that was directed by George Lucas and also starred Ron Howard, Richard Dreyfuss, and a young Harrison Ford. She sat next to a beautiful white '58 Chevy Impala, like the one used in the movie, with American Graffiti playing on small DVD player.

The show had a goal, to raise money for 'Toys for Tot.' They did quite well raising over $6,000 in the raffle, and running several silent auctions. Including the tickets prices the organizers were hopeful that they can beat last years $20,000, when all the money is counted.

Even if you were not alive to enjoy these cars when were new off the showroom floors. (As this writer certainly did not.) Shows like these still make you appreciate these classic cars.