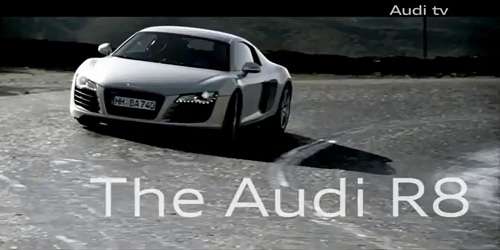 Audi has released a teaser video of the second generation Audi R8, which all gearheds are surely eagerly waiting for.
Advertisement

For those that don't know, which you surely should if you love cars, the Audi R8 is an all-wheel-drive, mid-engined sports car. (Mid-engine is the only way to go!) It shares some mechanical components and vehicle platform with the Lamborghini Gallardo. (This is due in part to the fact the Volkswagen Group owns both Lamborghini and Audi.) The 4.2 liter V8 engine delivers a marvelous 424 horsepower. The 0-60 time on the standard Coupe version is a mere 4.6 seconds.

When the Audi R8 made it's world debut back in 2006, it was clear it was going to be an instant hit. The popularity only grew as the R8 was used in big blockbuster Hollywood movies. Most notably the vehicle of choice for genius and playboy billionaire Tony Stark, played by Robert Downey Jr., in the movie Ironman. As well in Ironman 2 the Audi R8 Spyder (convertible) was driven by Tony Stark as well.

Now that the R8 is nearing 6 years old the only logical thing for Audi to do is update and refresh this glorious sports car. The new teaser video reminisces of the greatness of Audi R8 by showing all the six of the different models available, including the convertible and V10 versions.

Of course it will be a bit of awhile until we get the second-generation Audi R8. It is expected to be go on sale sometime in 2014, which most probably think is nowhere near soon enough. I mean come on Audi, that's 2 years away! We need a new Audi R8 now!

The second-generation Audi R8's codename is the NF. It has been reported that Audi's engineers are hard at work developing even lighter materials and techniques for the second-generation. Of course increasing the weight to power ratio.

A prototype R8 that is not included in the video, which is quite interesting is e-tron. It looks a lot like the Audi R8, but isn't quite like the original. This electric concept has four independent electric motors, 2 mounted two mounted within the center of the front axle and the other two within the rear axle. Each produces 78 horsepower. Supposedly this electric version is capable of 0-60 mph times of around 4.8 seconds. Making it only 0.2 seconds slower than the gas powered R8 coupe V8. The top speed will be limited to a paltry 124 mph, to protect the charge of the battery. It is being planned for a launch sometime in 2012.

You will need to watch the video carefully because the upcoming second-generation Audi R8 has only been teased very briefly. Can you catch it?

LG's New EV Battery Plant Is a Welcome News for Tesla
Tesla Giga Berlin's New Hurdle: It's Not Only the Gov't, but Now Tesla Itself
END_OF_DOCUMENT_TOKEN_TO_BE_REPLACED