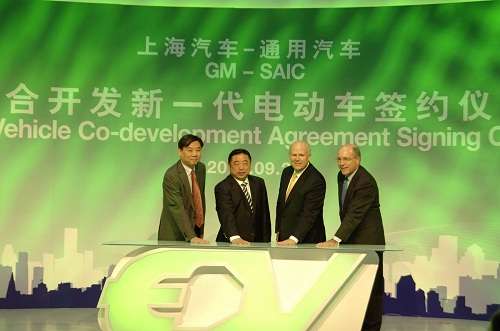 The Pan Asia Technical Automotive Center (PATAC) – SAIC and GM’s engineering and design joint venture in Shanghai – will serve as the development center for the architecture. Joint teams from the parent companies will also cooperate on the development of key components and vehicle structures and architecture. This agreement ensures local input in the development of electric vehicle technology, something that the Chinese have been pushing for.
Today’s agreement is a follow-up to the non-binding memorandum of understanding (MoU) on strategic cooperation signed by SAIC and GM on Nov. 3, 2010. The two automakers had pledged to reinforce their collaboration in certain core areas of their business, including the development of new energy vehicles and the creation of a stronger and more integrated role for PATAC to work on future vehicles and powertrains. GM and SAIC are making an equal investment in the project.

The sharing of intellectual property raises concerns that the Chinese will use this access to compete against its partner in the future, but Tim Lee, president of GM International Operations stated, “We can accomplish far more by working together than we can by working separately.”.

GM has worked with SAIC in China for nearly 15 years. But this latest development gives GM access to sell cars in China at the low end of the market, China’s fastest growing segment.

Vehicles resulting from the partnership will be sold in China under Shanghai GM and SAIC brands. SAIC and GM will also use the architecture to build electric vehicles around the globe for their own purposes. Product details and timing will be announced at a later date.

The Chinese are offering major incentives but only for vehicles produced domestically. Auto companies have complained about Chinese enforced transfer of technologies as a technological shakedown, but as with GM, the companies cannot afford to pass up access to the market. The U.S. automaker will not provide the Chinese with intellectual property for its extended-range electric vehicle Chevrolet Volt. As a result the Volt will not receive incentives and will be subject to tariffs that are imposed by the Chinese on imported vehicles.

A new book, American Wheels, Chinese Roads: The Story of General Motors in China, authored by a leading expert on China’s auto industry, Michael Dunne, provides deeper insight into the relationship between GM and SAIC.

Panasonic Updates Profit Forecast, Noting How Much Tesla Batteries Help The Jump
2022 Porsche 911 GT3 Laps Nurburgring in 7:04 With Journalist Behind The Wheel
END_OF_DOCUMENT_TOKEN_TO_BE_REPLACED