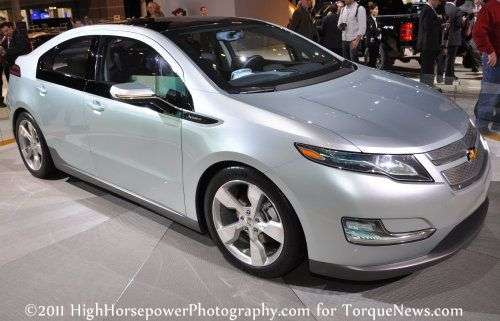 China wants GM to share valuable technology information about Chevy Volt to give the company access to its market with subsidies.
Advertisement

General Motors wants to start selling its Chevy Volt extended range vehicle in China by the end of the year. But the Chinese government, according to an article in The New York Times, is refusing to allow GM to give the Volt the generous subsidies that total up to $19,300, unless the auto maker transfers engineering secrets of one of Volt's key technologies to a Chinese automaker.

The potential for sales of alternative vehicles in China grows as China calls for more fuel efficiency and the lowering of polluting emissions from fossil fuels. But selling the Volt in China, the world’s largest car market, without the subsidies would be impossible. While not yet priced in China, the Volt costs $41,000 in the U.S. Priced similarly in China, subsidies could cut the cost of the car in half. GM will also be competing with Chinese automakers who are currently building electric cars and benefiting from subsidies.
GM is asking China to open its market to the Volt without the transfer of technology. But Ford, who has a demonstration project underway in China, has already agreed to accede to their demands.

Major automakers look at the Chinese market as a way to earn back returns on their massive research and development investments alternative vehicles. Many of them are holding back because they do not want to transfer technology.

Trade experts, according to The Times, say that the policy of refusing subsidies without a transfer of technology makes selling alterative vehicles in China cost prohibitive and that this constitutes a violation of the rules of the World Trade Organization, WTO. China is a member of the WTO and according to the rules cannot favor their own product over imports. The subsidy rule covers electric cars, plug-in hybrids and fuel cell vehicles.

Western businesses have succumbed to pressure as the Chinese use the leverage of its market to gain knowledge about other important technologies. The Chinese use the technology transfers to build industry and infrastructure in China.