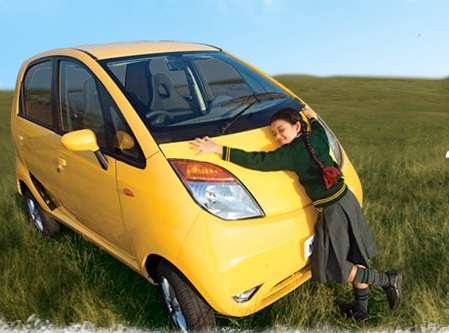 Tata Nano will tour India with $4.6M of jewels

The Tata Nano has been called the world’s cheapest car available for sale, with a sticker of only approximately $3,000.00. Just overnight, as a publicity stunt, the vehicle was transformed with gold, silver and jewelry into the world’s most expensive vehicle.
Advertisement

The Indian-made Tata Nano was unveiled in Mumbai with gemstone trimmings and lavish gold and silver jewels at the Tata Theatre in Mumbai and Tata Group chairman Ratan Tata was in charge of the unveiling, which occurred on Monday. Ratan Tata’s company also controls Jaguar and Land Rover.

The interesting spectacle was adorned with 176 pounds of 22-karat gold and 33 pounds of silver and various precious and semi-precious stones, including pearls, rubies, emeralds and the black beads worn by Hindu brides in a necklace. The Wall Street Journal priced the original $3,000 vehicle at $4.6 million dollars with all its trimmings.

To help with publicity of the Tata Nano, the vehicle with its dressings is going to tour around India for all to see. It will be on the road for six months. A few lucky viewers in each city will be afforded the opportunity to sit in the car to take photographs.

The promotional campaign is being run by Goldplus, which is a chain of jewelry store. Goldplus means jewelry and the brand is meant to target the semi-urban and rural market. The ostentatious and flashy car was crafted to help celebrate 5,000 years of jewelry making in India.

The COO of the jewelry division of Titan Industries stated that the Nano was a symbol of “middle-class aspiration” and he believes that the Nano is “something that would appeal in small towns, the core market for Goldplus”. The Tata Nano was designed to bring affordable vehicles to the people in India.

The promotion of the Tata Nano will bring with it to each it visits, contests and promotions to make the event more interesting and exciting. This will help to draw crowds to come out to see the car in all its glory.

C.V. Venkataraman, the chief operating officer of the jewelry division of Titan Industries, hopes someone will buy this jeweled Tata Nano. The COO stated, “500 years from now that would be quite a family heirloom, wouldn’t it?”