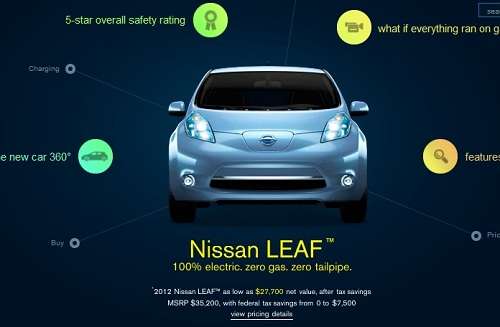 The cost of electric cars: The price is still high

One would think that the overall cost of owning an environmentally friendly and eco-friendly electric car would be cheaper than its conventional counterpart. This is not necessarily the case; however.
Advertisement

It has been reported that electric cars will not be cheaper to own and operate than conventional cars until the year 2030. In fact, the price of owning a car that one would think would cost less damage to the environment and would cost less money from their pocket books, is actually not less expensive at all.

It is estimated, that to own and operate an electrical car, it is approximately £5,000 (converts to $7,027.28) more than a conventional car. This is the price for all the upfront and running costs, including fuel and insurance for environmentally friendly electric cars.

An electric car is an automobile which is propelled by electric motor(s). These kinds of cars use electrical energy which is stored in batteries or other energy storage devices within the car. This was thought to make the whole driving experience more efficient and less expensive.

Before 2011, electric cars were seen to have many potential benefits as compared to conventional cars. In electrical cars, the internal combustion systems produce a significant reduction of air pollution because they do not emit harmful tailpipe pollutants from the vehicle’s source of power at the point of operation, which are tail pipe emissions.

As of 2011, electric cars have been significantly more expensive than engine vehicles and even hybrid electric vehicles simply due to the additional cost of their lithium-ion battery pack. With the help of mass production of these kinds of lithium-ion batteries, battery prices are slowly coming down. As more locations make way for low cost electric car charging stations, these kinds of cars may become less expensive to drive.

Several governments have come up with economic incentives to help keep the costs of electrical cars down and to help promote their sales. For example, the U.S. has pledged $2.4 billion in federal grants for electric cars and batteries and China has pledged to provide $15 billion for the cause.

To reduce the overall costs of buying electrical cars to begin with, many national and local governments are offering tax credits, subsidies, and other incentives to reduce the net purchase price of electric cars and other plug-ins necessary for the cars.

Tesla-Funded Research Reveals One of The Biggest Mysteries of EV Battery
Tesla Tesla Buyer Nets a Whopping $12,000 Discount After Asking for Reduction
END_OF_DOCUMENT_TOKEN_TO_BE_REPLACED