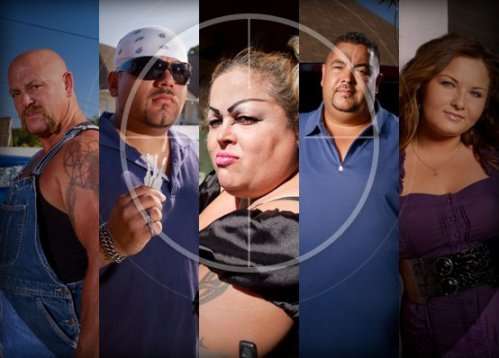 Which 'Operation Repo' person would you be for Halloween?

When viewers of "Operation Repo" on truTV were asked what repo man or woman they would like to be on Halloween, Facebook fans of the show that's videotaped in southern California chirped up in big numbers. Froy, Lyndah and Lou were left alone, for the most part. Who's left?
Advertisement

The choices were clear: Even though her Facebook page has more than 13,000 likes, nobody wants to be Lyndah, the daddy's girl, "I don't have to do that because my dad's the boss" boss' daughter (far right in the picture).

For Halloween night and Halloween parties, most fans of "OpRepo" want to be Sonia (in the center of the picture), a bombastic woman who doesn't let anybody push her around when she repossesses a car from an "RO" (registered owner). She frequently wears dark-colored dresses. Overwhelmingly, women AND men said they would be Sonia, the sister of the owner who's got a bad attitude and doesn't care who doesn't like it.

Another popular choice: Matt (far left in the picture), the bald, stocky, muscular biker with a short fuse who flexes his tats and flips off his shades and handles things when ROs attack or don't calm down. He also has a bad attitude. He has quit and been fired, but always comes back or is taken back because he's good at his job. Matt is respectful of police but not respectful to indignant deadbeats who don't make their car payments. If he can get a person's goat, male or female, he will, just for fun, and then laugh as he's driving away in their car. Matt has been in the back of a police car on occasion in southern California and Mexico but always gets out of it somehow.

Here's what fans of the show had to say about who they would dress up as:

Jaqui Martinez: "Sonia! She is so awesome."

David Stanley: "I'd dress up like that midget you guys had on one episode a while back because he was way too energetic and ... a lot smaller than the whole crew. But yeah I think that would be kinda difficult since midget status is what ... 4-foot-3 ... and I am 5-foot-9, lol."

Josh Pedro: "I'd dress up as Sonia, since she's scary enough, except I'm not fat, cause there's such a thing called a diet and treadmill. Guess she's never heard of it."

Diane Yniguez Allen: "The show is real! I love me some Sonia. ... Enough with the fat jokes. Sonia is a very confident lady in her skin. She's laughing at (you) all the way to the bank."

Ray Sheffield: "I'd dress up as Sonia. She has the attitude. Matt, he ain't scary at all. He's all talk."

Virgilio Gallardo: "Please, i want to be Sonia so I can scare everybody. Jajaja."

Irene Carrasco: "Sonia. I love her, she's down to earth, she is awesome."

Victor Garcia: "I would be Sonia. She is the bomb on the show. She is not afraid of anyone. She gets the job done. Love you, Sonia."

Naomi Walls: "It wouldn't be difficult to dress like Sonia since her makeup looks like it's Halloween every damned day."

Hawke Fracassa covers the auto beat from Detroit for torquenews.com. Reach him at [email protected] or follow him on Twitter @HawkeFracassa.