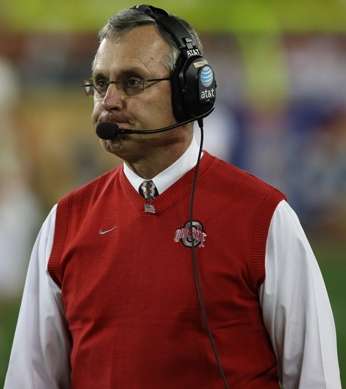 The Ohio State University football program is under scrutiny over the sale or loan of used cars from two auto dealerships at bargain prices to a few dozen football players and their families in the past six years. And the impact of the controversy in part is the resignation today of Coach Jim Tressel.
Advertisement

“After meeting with university officials, we agreed that it is in the best interest of Ohio State that I resign as head football coach,” Tressel (pictured) said in a statement released today by the university. “The appreciation (wife Ellen) and I have for the Buckeye Nation is immeasurable.”

Tressel, the most successful coach in OSU history, did not face reporters. He was immediately replaced by defensive coordinator Luke Fickell. Fickell will be considered the interim coach but has the job for 2011. A national search for a new coach is under way now.

The auto brouhaha is among the things that brought about Tressel's departure as head coach, and the controversy isn't over. The investigation is ongoing.

Most of the cars in question are Chevrolets, Buicks and Dodges that were sold for an average price of under $12,000, according to a Columbus Dispatch report. Some of the cars had more than 100,000 miles on them.

The two auto dealerships in Columbus, where Ohio State is based, ostensibly gave deals to some but not all of the student-athletes and their kin.

The university is sorting out the possibilities of impropriety, but makes clear that to date nothing concrete has been found to support that concern.

Owners of the two dealerships and the account executive who handled the transactions for both of them deny anybody was given anything improperly.

The purchases that are under review are a big deal because under NCAA guidelines football players like the Buckeyes are not allowed to get special consideration and discounts that everyday students couldn't also get.

ESPN.com reports both auto dealerships have football memorabilia in their showrooms with autographs from some of the players.

One thing that has turned Columbus on its ear is the situation involving former Buckeye linebacker Thaddeus Gibson, who purchased a pre-owned Chrysler 300C.

Gibson says he agreed to pay $13,700 for the car, according to The Dispatch investigation, but some documents uncovered by reporters say he paid nothing.

Gibson told the daily newspaper that he still makes payments on the 300C and the newspaper, since its initial report on Wednesday, has found that there are conflicting documents now available that make a case that Gibson has been making payments, ESPN.com says.

Documents cited by the newspaper and ESPN.com say Gibson bought the car in June 2007 and financed it through Huntington National Bank. A separate document through the same bank says the car was bought for nothing in March 2008. The university is determining at this time which document is legitimate.

Ohio State's compliance department is investigating the Gibson transaction and at least four dozen others involving car sales to players and their relatives.

There is no evidence yet showing players did anything wrong, according to an athletic director who issued a statement to reporters over this Memorial Day weekend. However, Ohio State is going to continue to scrutinize the details of the transactions to ensure they are all above board and meet university policies, he said.

The account executive at the car dealerships who handled the sales and loans received game passes to seven football games from players. Passes included seats for the 2007 national championship game and the 2009 Fiesta Bowl, according to an Associated Press report. The university has since stopped the account executive from seeing games for free by banning him from the guest list.

Six big schools have faced NCAA sanctions since 1990 over athletes getting free cars or discounts on purchases. They are Arizona State, Illinois (twice), Louisville, Michigan State, Minnesota and Southern Cal.