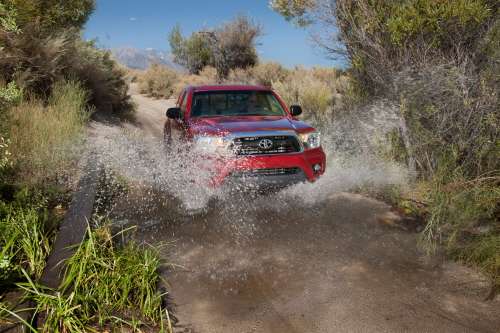 Toyota today introduced a new 2012 limited-edition pickup truck in Dallas that will be assembled for eight weeks only this spring in San Antonio. The new 2012 Tacoma Toyota Racing Development T|X Extreme pickup will start at around $35,000 after it goes into production and reaches Toyota dealerships in March.
Advertisement

A pre-production model was unveiled today at the Texas state fair.

The truck has bold graphics that shout "Baja Series” and embodies a high level of fun and function for a Tacoma TRD Off-Road pickup.

“The Tacoma has long been the sales leader by a wide margin in the compact pickup segment thanks to its well-earned reputation for stellar quality, durability, reliability and off-road capability,” said Bob Carter, group vice president and general manager, Toyota Division.

Toyota has a rich Baja racing truck heritage that dates back 30 years and includes titles at the Baja 500 and 1000. Toyota’s desert racing program has inspired the development of numerous TRD off-road focused products and packages, including the Tacoma PreRunner and TRD Off-Road packages for both the Tacoma and Tundra.

Last year, Tacoma’s Off-Road Package was enhanced with the launch of the TRD T|X and T|X Pro packages. TRD now takes Tacoma off-roading to the next level with the development of the T|X Baja Series.

The T|X Baja Series is undergoing testing to see if it can be used on the Tacoma Access and Double Cab 4x4 models equipped with the TRD Off-Road Package, and PreRunner models.

The T|X Baja Series will be part of a 2012 Tacoma line that is updated with a restyled front end and a refreshed interior in all models.

"We’ve invested more than $1.3 billion since we first broke ground in San Antonio in 2003, and when we brought the Tacoma to the San Antonio plant last year, it brought several hundred additional jobs to both the plant and our suppliers, creating an even more positive economic impact to the area and the state."

Toyota hopes to set a new benchmark with the new TRD Tacoma.

"This pre-production version of the T|X Baja Series was developed in partnership with TRD for truck owners who spend a lot of time off-road, whether it’s for work or play," Carter said. "It’s the type of truck that will shine in a Texas ranch environment, or on a Midwest hunting trip, off the highway in a California desert, or anywhere, east or west, where the roads are rugged.

"It all starts with the capability of the popular TRD Off-Road package. ... The front suspension has been lifted one-and-a-half inches, allowing an additional 1 inch of wheel travel provided by TRD coil springs and 60-millimeter Bilstein race shocks.

"The rear suspension has been equipped with 50-millimeter Bilstein race shocks with a remote reservoir to increase shock-oil capacity for greater heat dissipation and damping sensitivity. And the rear suspension also features a 1.5-inch increase in wheel travel."

The T|X Baja Series will initially be available on both the Tacoma Access and Double Cab 4x4 models equipped with the TRD Off-Road Package.

"Although we don’t have final pricing at this time, I can tell you that the Baja Series will provide enhanced off-road capability in a price range that is accessible to a broad audience. That means a price in the mid-$30,000s rather than the high-$40,000s or low-$50,000s."