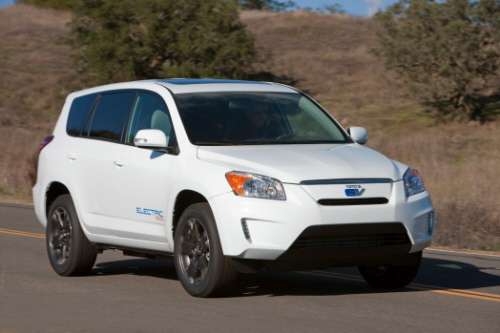 Tesla Motors and Toyota will build the 2012 RAV4 electric vehicle in Canada, the companies announced this afternoon. Specifically, their jointly developed RAV4 will get most of its important mechanical parts from Tesla but will be assembled by Toyota at a plant in Woodstock, Ontario, beginning next year.
Advertisement

“The Tesla-Toyota joint development team has agreed that building the vehicle at the Woodstock plant on the same line as the gasoline-powered RAV4 will streamline and simplify the production process and guarantee the highest level of quality control,” said Ray Tanguay, Toyota Motor Manufacturing chairman, who hosted Canadian officials at the plant today and thanked them for their support.

“This is a great example of Toyota’s determination to collaborate with companies with leading edge technology.”

Toyota will pay Tesla $100 million to make and ship the electric powertrain from Palo Alto, Calif., to northeast Canada. Components from Tesla for each Toyota RAV4 (pictured) include a battery, motor, gear box and power electronics.

Pricing, volume and regional distribution will be determined and announced at a later time, the companies said in a statement.

In July of last year, Tesla and Toyota Engineering and Manufacturing, America collaborated to convert 32 conventional gas-engine RAV4 compact SUVs into fully functional RAV4 EV prototypes. Toyota is committed to a broad strategy of sustainable mobility, incorporating products, partnerships, the urban environment, and energy, it said in the statement. The RAV4 EV is one of several advanced-technology new products coming for Toyota. In addition to expanding the Prius family with the upcoming Prius v and Prius Plug-in Hybrid, Toyota will introduce an electric version of the Scion iQ in 2012 and a Hydrogen Fuel Cell Hybrid Vehicle by 2015.