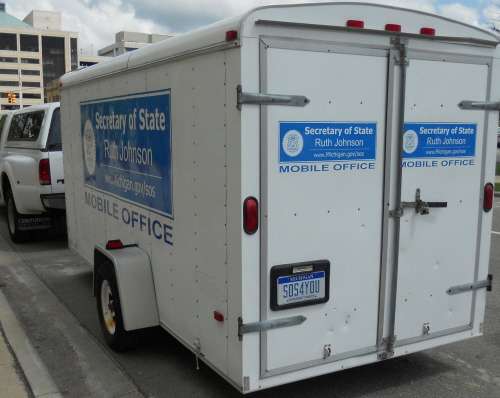 Michigan's Secretary of State has found a way to creatively serve drivers while at the same time saving money and offering greater accessibility. The mobile office put on the road today by Secretary of State Ruth Johnson has every service offered by brick-and-mortar branches but has the added benefit of being able to be used at special events or as a mobile site when a branch is shut for remodeling.
Advertisement

The maiden voyage for the mobile office (pictured) is June 20-23, to 970 N. Van Dyke in Bad Axe in Michigan's Thumb. There, the moving office will take care of customers while the local branch office is renovated.

There has been a mobile office before. The original office, put on the road in 1997, was driven more than 130,000 miles.

“The old mobile office had served the state well for many years but was due for replacement,” Johnson said. “With a little thriftiness and innovation, we were able to find a common-sense solution that saves tax dollars and gives us an office that can be placed in a wider variety of convenient locations.”

So the department acquired a trailer that was not being used in the state motor pool to use, for free. It had belonged to another state department before but was sitting in a warehouse, neglected and unused.

Secretary of State staff refurbished the trailer and put a camera, printers, modem and supplies from the old office inside of it. New laptop computers were among the only new equipment purchased. Johnson estimates the office saved $75,000 by equipping the used trailer instead of replacing the former mobile office with a new one.

The new office is contained on four, easy-to-use carts that are rolled out of a 14-foot-by-7-foot trailer and then assembled as a customer service counter with all the necessary equipment and data connections, department spokeswoman Tracy Ward said in a news release. The trailer office replaces the old office, which was a 24-foot-long modified recreational camper trailer.

The department used to need a driver with a commercial driver license. The new office can be transported by someone with a regular driver's license because it is smaller and lighter. The trailer can be house indoors or outdoors or set up for festivals.

The Secretary of State’s Office is using an 11-year-old, diesel-operated Ford F-450 truck to pull the new mobile office. Any truck or van with a trailer hitch is capable of doing the job if the Ford breaks down or is unavailable.

For information about where the trailer office might be located at any given time, check for official Secretary of State Twitter feeds at twitter.com/Michsos or call the Department of State Information Center at 1-888-767-6424.

Hawke Fracassa writes about cars and transportation for TorqueNews.com. You can reach him at [email protected]