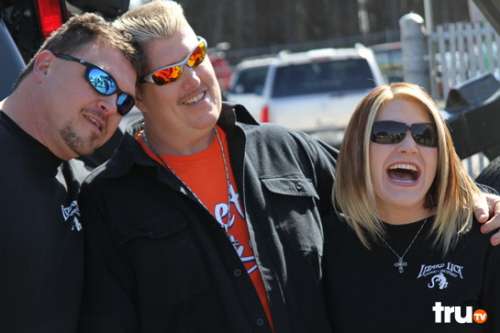 There are some great half-hour reality shows on cable that show us what it's like to lose our cars. And it ain't pretty. Two that are must-watch TV are "Operation Repo" and "Lizard Lick Towing" on truTV.
Advertisement

"Operation Repo," whose tagline is "it ain't no joke, if you don't pay that note," airs at 9 p.m. Wednesdays and at many other times also. Op Repo is a hard-core reality program that chronicles the repossession of deadbeats' cars, trucks, motorcycles, dirt bikes and boats in southern California. We get to go along for the ride as the crew banters back and forth in the repo truck about everything from office gossip to what kind of girls the repo guys like to why some people should be fired. Oh, and they also talk about how annoying it is to have to work with Lou's mouthy 20-year-old daughter, Lyndah.

Op Repo is entertaining because it is real. There's no way this is scripted. Its dialogue is too toxic to believe that is true. When they repossess somebody's car, people are livid. Desperate. Profane. When you watch this stuff, you say to yourself, "I don't want to be this guy." It is the ultimate indignity.

I have seen deadbeats on the show punch, wrestle with and shoot at Matt and Froy and threaten Lou, the 300-pound marine who's the boss, with chains, pistols and sticks.

In one OMG moment, a hooked-up car came loose at it was being towed away as two chubby deadbeats, one of them with a weapon, ran after them. The loose car rammed grille-first into a parked car on the street because the boss' daughter messed up the hook-up. This was after Matt refused to help her because he wanted to prove a point that she had no business doing the job in the field because she was not at the time properly trained for it. He takes no responsibility for the fact that his boss, Lou, had asked him to train her better.

Once when Lou tried to repo a car from a puny construction worker, the "R.O.," or "registered owner," told his idiot friend to pick up the car with a claw, ruining the car. At one repo, Matt and Froy were in a sports car that they were trying to drive away when the brother of an R.O. drove right over the top of them with a piece of heavy machinery. Hey, people could die doing this.

Registered owners stammer, yell, beg, plead, cry and threaten when they are told what is happening. Rarely is someone composed. Someone almost always says, rapidly, "No, no, no, no, no," "what are you doing?" or "this must be a mistake." But it never is. If you're a deadbeat who's late on a car payment, you know who you are.

When a deadbeat is resigned to giving up the car, keys are thrown in disgust onto the pavement, in the dirt or in bushes. Nobody ever has class. Froy, Sonia and Lou just pick them up and drive off, but not without a snarky comment. Lou shakes his head and mutters "idiots" as he drives away from a repo.

Deadbeats on Op Repo are men and women; rich and poor; wealthy and working class; employed, unemployed and homeless; intelligent and stupid; big and small; young and old; few think the fact that they didn't pay their own bill is the problem. It's always someone else's fault and "why are you doing this to me?" Every deadbeat is at least two months behind on payments.

The show flits between field footage (there are camera people who videotape their exchanges and cameras mounted inside the truck to record conversations), many times of Matt laughing at little men who threaten him, and candid in-studio interviews with all of the repo people. When things get hot, the repo people yell: "Turn off the cameras." Sometimes they do, sometimes they don't. It has given me a laugh for months every time I watch it because they have no filter; these people say things before they think, which makes for some pretty great TV.

Another must-see show is "All Worked Up," which airs at 10 p.m. Mondays on truTV. It features a meter maid from Cali, a process server from New York City and a repo crew from Lizard Lick, N.C. It's fun to watch if the target of the professionals isn't you.

A spinoff show, "Lizard Lick Towing," has emerged from the "All Worked Up" mix and now has its own time slot at 9 p.m. Mondays on the same channel. New episodes begin in August.

Until August, the reruns of "Lizard Lick" are totally worth watching, if not for the entertainment value of watching two southern gentlemen repossess cars and trucks and having fun doing it then for the owner's use of southern phrases to describe a sticky situation. It's Gomer Pyle with license.

The Lizard Lick crew (pictured) of Amy (the wife), Ron (the owner) and Bobby (Ron's best friend and the big guy who holds you down when you mouth off) do things differently than Lou and Matt and Froy. Because Lizard Lick is in Confederate country, the men (and the women) have more heft and are bolder and heavier and mouthier and more fearless than the much more civilized Californian R.O.s the Op Repo people encounter.

While Op Repo professionals go to almost extreme efforts to make sure they have the right car by checking the VIN before they hook anything up or ask for the keys, Ron and Bobby even though they are big boys are more stealth. They get in and out and giggle like schoolgirls as they drive off, with the steamed R.O. hopping up and down swearing like a wildman in back of them. Unlike the Cali crew, which has most of its beefs in the field, most of Lizard Lick's confrontations come when the car owners come to the shop to get their cars back. Things often get ugly, but so far, nobody's dead.

My favorite scene was when Bobby and Ron snuck into a race track and repo'd a visiting race driver's vehicle that was parked on the track. As Bobby drove off unmolested, Ron was attacked by four men at the gate and was beat up real good but was OK.

Amy has no sympathy for anyone. She throws men twice her size out of the shop. And her husband, Ron well, he tells us us he's the boss, but we all know that in reality, AMY is the boss in that family. She always gets what she wants ... unlike the registered owners of the cars they repossess.

Also on cable television is a show worth watching out of Albuquerque, N.M., called "Hollywood's Top Ten," on the REELZCHANNEL.

The channel asked its viewers to think of their favorite 4-wheeled movie stars and to rank them in a top 10 list packed with "tire-shredding moments, insane stunts and classic chase scenes."

Answers ranged from the Ghostbusters’ Ecto-1 custom Cadillac with its "unmistakable siren squall" to Batman’s techie Batmobile from "The Dark Knight."

You can reach Hawke Fracassa of TorqueNews.com at [email protected]

Storm Savino wrote on July 19, 2011 - 6:55pm Permalink
You really should do more research before writing a report. It is stated in the beginning of Operation Fake-O that everything is "based on actual events" the show is nothing but scripted garbage with paid actors. The show was started years ago on Telemundo as a COMEDY and some fool thought to give it a try in English and failed worse then J Lo did in Gigli! They are so fake they use what is called a Sling Style Truck that was out of date in the mid 1980's! Why you ask? Story line. That simple it forces them to have to get the keys to the car and start a fight. There is no new vehicle that can be safety towed with this hunk of junk! If you want to see what a REAL tow company does for a living come to Florida and Ride with me for a week! None of this paid actor bull crap!
Lizard Lover! wrote on July 19, 2011 - 7:02pm Permalink
Ok Mr. or Mrs. "Know-it-all-reporter" .. I cant believe you are compairing Lizard Lick (LLTR) to "Operation FAKE-O"! FAKE-O is scripted, read the disclosure at the begining of the next show. They are rude, nasty , loud mouthed Telemundo TV rejects! Seriously thats where they got their start! LLTR is the real deal , Amy is a former heavy weight camp and is a mortician and Ron was a body builder too and he is a reverend. They are amazing people and have said before that much UNLIKE the other show , they have a heart. If they repo from a mom on hard times or a couple just not able to make payments they will go back to the house and drop off food or clothes or whatever they need. Any one who love LLTR should check them out on Facebook - Under Lizard Lick Towing and Recovery - and then find one of their meet & greet days to say hey to them.
Perry County wrote on July 19, 2011 - 7:28pm Permalink
This is awesome stuff, yeah I saw that on OP Repo, kinda put a bad taste in my mouth for that show, but it's true, a lot of that can't be scripted. But LL is bad azz man. These guys should be right here, this is redneck country as well. Love all of those on Lizzard Lick Towing...