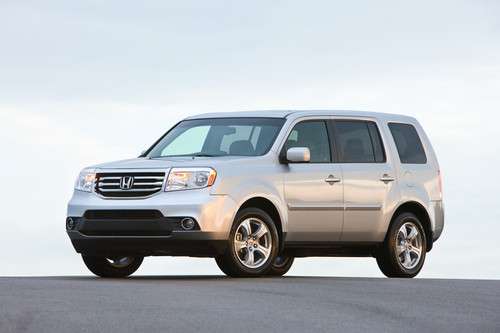 Honda is hanging on to hold its own in a down U.S. market. As the last quarter of 2011 approaches, the Japanese car company's sales are only down 6% compared with 2010 unit sales, despite a rocky August.
Advertisement

Helping Honda keep the faith is the Pilot (pictured) sport-utility vehicle, whose sales perked up almost 12% last month compared with August 2010. And just this week the 8-passenger 2012 Honda Pilot made its debut, all but ensuring brisk sales in September.

Honda sent 9,825 Pilots home with American owners last month. There were a lot of Accords and CR-Vs driven away from showrooms as well, but sales drops for these traditional mainstays pushed into the double digits (down 21.2% for the Accord, 18.1% for the CR-V). Honda sold 18,439 Accords and 16,572 CR-Vs last month.

The big picture is unsettling: August sales (83,321 vehicles) fell a whopping 27.2%. Even so, Honda has moved a respectable 770,265 cars and trucks so far in 2011. The sluggish showing compared with Hondas salad days reflects reduced inventories caused by production issues that resulted from Japan's deadly March 11 earthquake, not a lack of interest by Americans in the brand.

"The production plan for most of our models returned to 100% by late August at all of our North American factories," said John Mendel, executive vice president of sales for American Honda.

"A greater selection of vehicles is beginning to arrive at dealers (in September) as the company continues to recover from temporary supply disruptions."

Tesla-Funded Research Reveals One of The Biggest Mysteries of EV Battery
Tesla Tesla Buyer Nets a Whopping $12,000 Discount After Asking for Reduction
END_OF_DOCUMENT_TOKEN_TO_BE_REPLACED