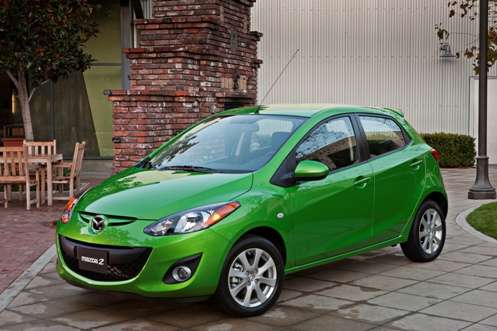 Mazda making a big impact in United States and Mexico

Big things are happening for Mazda in North America, where car sales are booming in the United States and the Mexico arm of the Japanese car company has a new boss on the heels of reporting its best sales month ever.
Advertisement

Every Mazda had sales jumps in November in the U.S. The Mazda6's sales were up 53.9% as the car had its best month since March 2009, and Mazda2 (pictured) sales went up a whopping 73.4%. Mazda's CX-7 and CX-9 SUVs had their best Novembers since 2007, and even the Mazda5, which had a routine month and broke no sales marks, reported a double-digit monthly sales increase (15.1%).

In charge of the growth surge in Mexico is Leopoldo "Polo" Orellana. He joined Mazda in October 2005. Last week, Orellana moved up from managing director to president of Mazda Motor de Mexico.

Besides heading up Mazda sales, marketing and customer service in Mexico, new President Orellana is overseeing development and management of a new assembly plant in Salamanca that begins making vehicles and engines in 2013.

Orellana won the presidency with his impressive track record as a go-getter. He has managed Mazda's rapid growth in Mexico, and is best known for successfully creating and running a national network of 31 stand-alone Mazda dealerships.

The fruits of Orellana's labor are easily quantified in the numbers that matter. Mazda has meteorically risen from relative obscurity to owning 3.4% of the Mexican automobile market and is now the eighth best-selling nameplate in the country, statistics show.

"Six years ago Mazda was unknown in Mexico," Jim O'Sullivan, president and CEO of Mazda's North American Operations, told reporters. "Under Polo's leadership, Mazda has become one of Mexico's most respected automotive brands and a household name.

"His new role as president will position us for further growth in Mexico and help guide our expansion throughout Latin America."

Colby joined Irvine, Calif.-based Mazda North American Operations in January 1990 as a vehicle systems specialist and has held several management positions with Mazda ever since.

Not everything is a rock party for Mazda in North America. The drag on the team is Mazda Canada, the third piece to the puzzle. The Canadian arm sold only 5,169 vehicles in November, down 2% compared with November 2010. And year-to-date sales (64,318 vehicles) have dropped 12% in Canada.