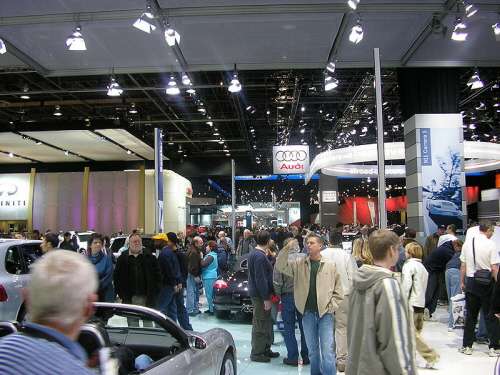 Compared with other auto shows, Detroit is still the best in the world

Detroit is like Cleveland, Youngstown or Buffalo. It is an urban center that's easy to kick when it's down because there are too many things to fix and not enough money to fix them. But one thing Detroit has that the other have-not cities lack is a world-class auto show, which compared with other auto shows is still the best in the world.
Advertisement

For everything good about Detroit, from its fast-paced auto show to the Red Wings to its stately architecture, perhaps there is also a building somewhere with shards of glass on the sidewalk, graffiti scrawled on a wall on a main thoroughfare and weeds growing out of sidewalk cracks in forgotten neighborhoods.

Yes, it is easy to kick Detroit when it's down. So it comes as no surprise that critics of the North American International Auto Show in Detroit, which is just a few months away now, are on their soapbox, saying it has seen better days. That compared with, say, the Frankfurt Motor Show, which opens on Tuesday, that Detroit's auto show is a relic whose salad days are behind it. Washed up. No longer important.

What nonsense. I've got news for the naysayers and crtics: The auto show in Detroit is nothing short of spectacular, still. Detroit is the auto capital of the world and as such has consistently lived up to its billing. It has perpetually put on one of the most amazing auto shows on the planet every year since the mid-1990s. Nobody does it better. The January show is one of the only U.S. auto shows sanctioned by the Organisation Internationale des Constructeurs d'Automobiles. That's not why it draws more than 800,000 people or more (pictured) every year. But it's a way to acknowledge the level of sophistication the show offers.

The argument that the auto press is disinterested in Detroit is ridiculous. Reporters trample all over themselves to get to Detroit in January. In 2012, Porsche and Nissan are both coming back to Detroit after a hiatus. They see good things are happening in Detroit and they realize they need to be here.

The lame excuse that Detroit's auto show has lost luster because Chrysler and General Motors almost bought the farm a few years ago doesn't mitigate the fact that when Detroit sneezes, the rest of the auto world hopes it doesn't catch cold. Detroit still wags the dog. Cars R Us. And don't you forget it.

It has been suggested that fewer media have come to Detroit to see automakers introduce cars, and that there has been a lemming-like flight of journalists to foreign venues like Tokyo and Frankfurt to view their spate of introductions. The only thing that means is that there are more journalists than ever due to the wild growth of Web sites worldwide. That's all that means is that there are more pretend journalists than ever before. These media are in many cases amateurs who thought it would be fun to create a Web site. All of the "name" credentialed media still come to Detroit, and then some.

Detroit automotive press coverage of the auto show has grown more crowded every year for the past two decades, to the point where it's like covering a Super Bowl. There are reporters everywhere all the time. To suggest that the Detroit auto show is anything but thriving is at the very least misinformation and at worst, a misinterpretation of reality, put out there by people who have no idea what they're talking about.

As far as automakers choosing to go overseas to introduce their cars, the reason for that is obvious: It has become a world market, more now than ever. If that means going to more exotic venues to showcase their new cars is the way to go to get the word out, there is room enough for everybody to co-exist in this auto show free-for-all. Detroit can afford to share the wealth.

But if you badmouth Detroit's show, you're just showing your ignorance.