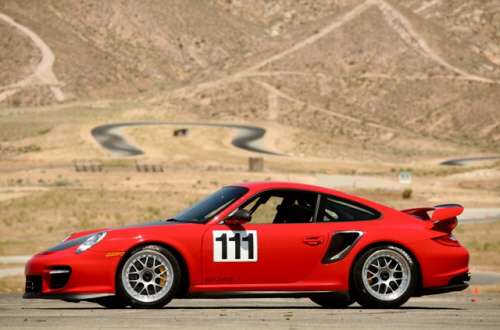 Seven-time Pikes Peak Hillclimb champ Jeff Zwart will drive Porsche’s fastest road car up the world’s most famous hillclimb. But as a precursor to that 12.42-mile race on Sunday, this weekend he drove 1,100 miles from California to Colorado to get there in his 620 horsepower 911 GT2 RS and arrived without incident. Zwart told TorqueNews.com today that his 911 delivered 22.3 mpg.
Advertisement

On Sunday, Zwart, a commercial film director from Woody Creek, Colo., will defend his 2WD Time Attack class championship from last year, when he drove a modified Porsche 911 GT3 Cup road racing car. At the 89th running of Pikes Peak next week, he will test the limits of the ultimate street-legal Porsche.

He and his crew picked up their race car Saturday at Porsche Motorsports North America in Orange County, Calif., and drove it on the interstate to Colorado Springs.

With technical support from Porsche and Michelin Tires, Zwart will seek to win the 89th running of the hillclimb classic. Zwart said that running a 2WD car – a 911 GT2 RS, one of just 500 produced – will be tough but fun. He has some experience with such cars: he drove a 911 GT2 in 2003.

"Although I have gained more than 150 horsepower from last year’s car, I have also gained a lot of chassis weight – the difference between a street car and a race car," Zwart said. "Also, I made good use of the sequential-shift transmission last year in the race car, and now have a six-speed manual gearbox to operate through Pikes Peaks’ 156 turns."

The course is even more challenging in 2011 because there are only two miles of gravel left on the mountain, which the locals are paving to boost tourist traffic. By 2012 the road will be all tarmac. The road starts at 9,390 feet above sea level and ends at 14,110 feet above sea level.

“We wanted to show the sports car enthusiasts that the Porsche 911 continues to be a car that meets multiple transportation needs, something its owners have known for years. You do not have to hit the top speed of 205 mph to enjoy this car on the road, yet we hope to use the 600-plus horsepower to get us up Pikes Peak fast enough to win the class,” Zwart said.

The 89th running of Pikes Peak begins with a practice on Wednesday, with festivities running into the weekend.